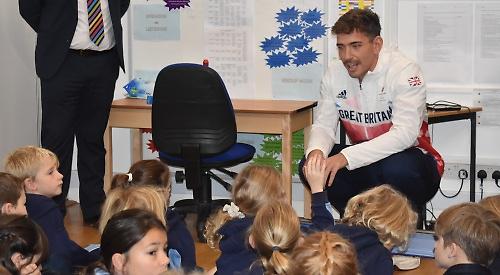 A PARALYMPIC rower has encouraged pupils at St Mary’s School in Henley to work hard to reach their goals.

James Fox MBE, of Hart Street, has won gold at Rio 2016 and Tokyo 2021 Paralympics in a mixed coxed four as well as winning four gold medals at the World Rowing Championships between 2013 and 2017.

The rower, who qualifies for the Paralympic team because of a congenital ankle condition which restricts his movement, visited children at the primary school in St Andrew’s Road on Wednesday last week.

He told the pupils in a morning assembly about his rowing journey, which started at age 11, including how he overcame his struggles after a car accident in 2010 which fractured two vertebra in his spine.

The 29-year-old said he couldn’t train for two years and thought his career was over but he qualified for the Paralympic team and won his first medal at the World Rowing Championships three years later.

Pupils were then able to ask the rower questions including whether he would be competiting in the Paris 2024 Paralympics. Fox admitted he hadn’t made a decision yet but would be speaking to his coaches soon.

Fox’s two gold medals were then passed around the children before the younger pupils were taken outside for a PE lesson.

The rower doesn't train on rowing machines or ergometers anymore due to an operation he had on a long-term hip injury but he made an exception for the school.

Fox, who remains unbeaten in his senior career, said: “I take up any opportunity like this as much as I can because I think it’s important to try and give back as when I was young and I didn’t know what was out there.

“I think it’s important that we know if we work hard you can achieve anything, it doesnt have to be sport.

“I think the biggest thing holding kids back is bravery and they should be confident to go out there and achieve what they want to achieve.”

Fox added that he thought the pupils had really thought provoking questions. “It’s a really nice balance of kids,” he said. “I’m pretty sure they will go far and they are good rowers too.”

Headmaster Rob Harmer said he was “so grateful” to have Fox visit the school to inspire the children and staff.

“It feels amazing having a Paralympian in school,” he said. “I think what James said about the journey he’s come on is inspiring, not just for the children but for the staff as well.

“It highlights that message that they can be whatever they want to be as long as they put in the hard work and determination.

“If they have that push and strive for it they will really achieve it and it’s just been wonderful and I’m so grateful.”