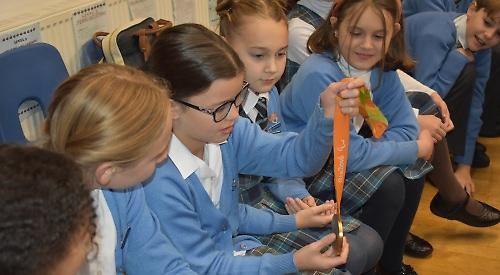 A PARALYMPIC rowing champion encouraged children to work hard during a visit to their school.

James Fox, who won gold in the mixed coxed four at the Paralympics in Rio in 2016 and in Tokyo this summer, spoke at an assembly at St Mary’s School in Henley.

He qualifies for the Paralympic team because of a congenital ankle condition which restricts his movement.

Fox, 29, of Hart Street, Henley, told how he couldn’t train for two years and feared his career was over after a car accident in 2010 in which he fractured two vertebrae.

He gave his gold medals to the children to pass around and answered their questions.

Fox said: “I take up any opportunity like this because when I was young I didn’t know what was out there. The biggest thing holding kids back is bravery and they should be confident to go out there and achieve.

“It’s important to know that if you work hard you can achieve anything and it doesn’t have to be sport.”

Fox, who remains unbeaten in his senior career, said he hadn’t yet decided whether to compete at the next Paralympics in Paris in 2024.

Headmaster Rob Harmer said he was grateful for the visit.

“I think what James said about his journey was inspiring, not just for the children but also for the staff,” he said.

“It highlights that message that they can be whatever they want to be as long as they put in the hard work and have determination.”