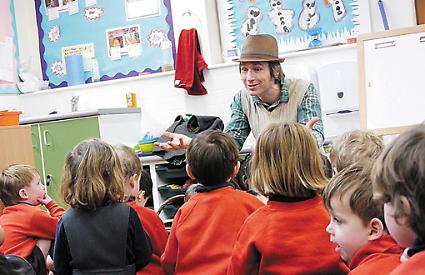 The CBeebies gardening star, alias Ben Faulks, put on a 20-minute show to mark the opening of the school’s new nursery block.

Click here to watch our video of his visit..

He brought a basket full of vegetables which he asked the children to identify before introducing them to a series of fruit and vegetable characters including a courgette called David and a bunch of bananas called Chico, Ronaldo and Nigel.

The children then sang gardening-themed songs, danced like wriggly worms and mimed being seeds growing into plants. After the show, headmaster Joseph Smith gave a speech to parents and chairman of governors Michael Hasslacher unveiled a plaque.

Mr Smith said: “Mr Bloom was wonderful. I’m not sure I could compete with him for entertaining the children as he did a fantastic job.”