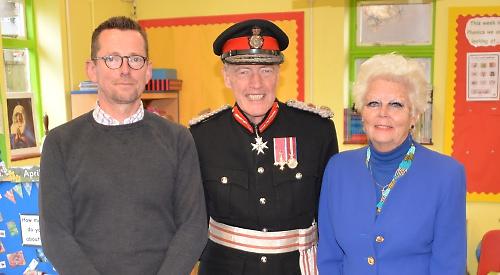 THE Lord Lieutenant of Oxfordshire visited Peppard Primary School to congratulate the children on their litter-picking efforts.

The pupils cleared the top common off the B481 as part of the village’s spring clean.

Tim Stevenson arrived at the school in Church Lane and talked to the children about his role and was also given a tour of the village by parish council chairwoman Jeni Wood.

He said: “I was there to celebrate what the children had done in terms of keeping Peppard free of litter.

“There are some significant movements to try to reduce litter.  It is a really important issue. It is also really good to have the opportunity to go into schools and say something about the Queen and my role.”

Councillor Wood said: “He had never toured the village before and thought it was charming. He agreed it was so lovely and clean.

“He was also very impressed with the children and thought the atmosphere in the school was lovely and that their questions were really intelligent. The school does have a very special atmosphere.”