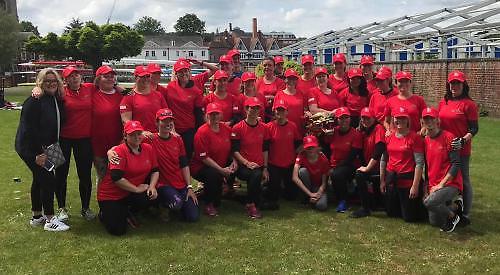 A GROUP of mothers rowed 20 miles along the River Thames in a Chinese dragon boat to raise money for their children’s school.

The 36 women all have sons and daughters at Peppard primary and raised more than £9,500 via a JustGiving page.

They rowed from Goring to Henley, making stops at Whitchurch lock, Mapledurham, Caversham, Sonning and Shiplake.

The row took a total seven hours, two hours ahead of schedule.

The boat had only 16 seats so some of the women swapped at each stop and the non-rowers were ferried to the next one in a minibus driven by headmaster Nick Steele.

The women’s families and supporters gathered to cheer them on and take pictures as they reached the finish line under Henley Bridge.

The rowers disembarked on the jetty at Leander Club and then walked to Mill Meadows where they drank Prosecco and gin and tonics to celebrate their achievement.

The money will be used to buy IT and playground equipment for the Church Lane school.

The challenge was organised by Antonia Waite, chairwoman of the Friends of Peppard School, and Lisa Fletcher, whose sons Max, nine, and Charlie, six, both attend the school.

The women held two practice sessions at the Eyot Centre in Henley before the row. Mrs Fletcher said: “We had no idea how far we were going to get or how fast we were going to go but every lock was open for us, which was amazing.

“It was a bit hard on the muscles but we all had a brilliant day.

“The hardest thing we had to do was keep in time with each other because if you don’t, you can’t get anywhere.

“There were no injuries, so it was a good day all round.”

She said the school needed the money.

“Government funding is getting less and less and every year schools have to come up with new ideas to fund-raise to pay for extra things the kids want to do,” said Mrs Fletcher.

“A lot of people have thanked us for organising it and coming up with the idea and everybody’s sprits are still up. The members of the boat really enjoyed it.”

She thanked Leander Club for allowing them to use the jetty and Ballards estate agents and Hobbs Gin for their donations.

Mr Steele said: “It was a fantastic day. The whole community was around supporting them. They were looking to raise £5,000 and the total is closer to £10,000, which is an incredible achievement.

“This ensures we can carry on giving the best to the children. There are things we would not have if it weren’t for the effort of these women.

“This year in particular our budget has been squeezed tighter than ever and events like this are lifesavers because they make a difference in the playground and the classroom.”