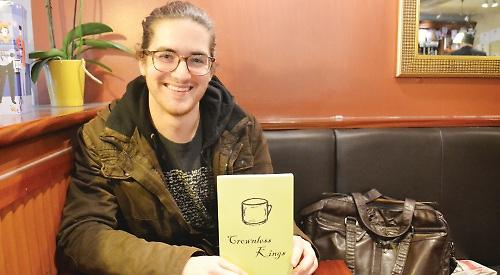 A MAN from Peppard has published his first novel.

Crownless Kings by Josh Potter explores a world where the socioeconomic hierarchy is reversed so the aim is to be poor and homeless.

Mr Potter, 24, of Blounts Court Road, was inspired to write it by his upbringing in countries including Uganda, India and America, where his parents Kevin and Linsey worked as missionaries.

He said: “Living in the poorest places like India and some of the richest places like Los Angeles let me see money and society on all the different levels.

“None of the places is bad, they are just different.

“This allowed me to look and think ‘hang on, let’s look at it in a different way’ and I drew on my experiences.”

Mr Potter wrote most of the 75,000-word book in 2015 during his second year of studying journalism at the University of the Arts in London and then completed it last year. He has used the pen name William Potter as William is his middle name.

Mr Potter, whose favourite novelist is F Scott Fitzgerald, currently works at Wine Rack in Market Place, Henley, but hopes to write for a living.

He said: “I want this to be my main career and writing to be my main way of making money. I had time in my second year of university because of it being flexible with working.

“Now I look at the book and see what I can do better next time. I like the book and I’m really glad it’s finished but now it’s about trying to get better.”