Writing two novels helped me get over clinical depression 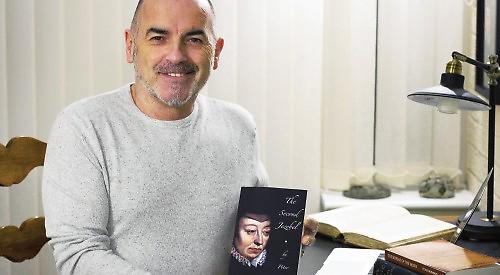 A MAN has told how writing novels helped him cope with clinical depression.

Peter Mowbray, 56, from Kingwood, has just self-published The Second Jezebel, his second story based on the life of Catherine de Medici, a French queen in the 16th century.

His first book, The Serpent of the Valois, was published in 2013 and looked at the earlier period of her life.

Mowbray says writing the books has helped him manage his condition, which was diagnosed in 2006, a year after he suffered a brain .

He recalled: “I was rushed to the Royal Berks in the middle of the night with the most indescribably painful headache.

“They it was a bleed on the brain and they moved me to the John Radcliffe Hospital in Oxford.

“I was there for four weeks and had to lay flat while it healed. I didn’t have to have an operation because it healed itself.”

Mowbray, a manager for a conference and events company in Highmoor, spent several weeks recovering at home.

He was diagnosed with clinical depression after seeing Elizabeth Collett at the Bell Surgery in Henley.

“Depression really creeps up on you,” said Mowbray, a father of two. “I couldn’t specifically say when I started getting depression. It was something that had been going on in my life without ever being diagnosed.

“ Collett was very effective in the way she was trying to help. I would turn up in tears to talk to her and she was a great help. She understood it was not nonsense and found the type of treatment I needed.

“She was instrumental in getting me through the worst times, along with my family.”

Mowbray, who has two sons with his wife Sally, said: “My family kept me going. Depression is a very, very difficult thing to deal with and I am very lucky to have them compared with others I know.”

He spent a year on various medications before he found the one that helped him best manage his condition. The other thing that helped was his writing.

Mowbray said: “I started putting the books together and it was fun. I had two jobs at the time and I would fit in my project by staying up until or .

“It was therapeutic to lose myself in something. It helped me relax and my brain worked well at that time.”

He had been researching Catherine de Medici since the mid-Nineties as a hobby and had made handwritten notes. He then started to turn this into a simple story, having found other books on Catherine, an Italian who married into French royalty, to be confusing.

To prepare for writing his first novel, he studied for an online
diploma.

Mowbray said: “It was broken down into modules that I could do in my own time. I didn’t do great at school and doing the course was incredibly difficult to start with but I was able to pick it up with time and there were lots of hints.

“I’m not Dan Brown or Hilary Mantel but I’m able to interpret a confusing period of time.”

The first novel followed the Queen’s emergence as a political force and her role in the infamous Massacre of St Bartholomew.

The follow-up covers her later life, including her struggle to keep the throne for her young son.

Mowbray said: “She was a pretty evil woman with an evil
reputation.”

He was born in Henley and grew up in Bix, where his family ran the village pub, the Fox, which has since closed and been converted into a house.

After leaving Gillotts School, he spent 20 years in the accounts department at Associated Asphalt, based at Highlands Farm, off Greys Road.

He first became interested in history as a child. “I remember as a youngster watching The Six Wives of Henry VIII on BBC TV,” he said. “There were advantages to your parents working behind a bar and not always being there to watch what you are doing!

“From then on I was hooked, with that period in particular. I read a great deal but it wasn’t until some years later that I resolved to put what I had learned to some use.”

Mowbray said he would urge anyone else suffering from depression to seek help. “A lot of people live with it but my advice is to talk to someone about it,” he said.

“I went on suffering for so long without knowing what it was. If you’re diagnosed it helps because you know the reasons for feeling the way you do.”

Mowbray intends to continue writing and his next novel is likely to focus on Edward II.

• The Second Jezebel is published by Grosvenor House Publishing and is available on Amazon (£10).