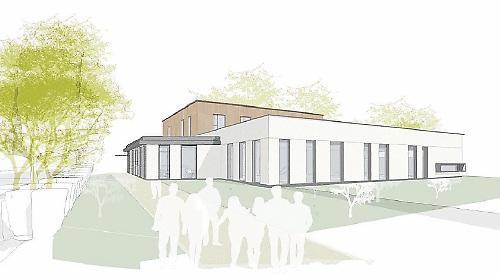 PHYLLIS Court Club has been granted permission to build a new sports and fitness pavilion in Henley.

The new building at the private members’ club should be completed next year and will include a swimming pool, gym, exercise studio, treatment rooms and changing rooms.

The club’s tennis courts will be relocated as part of the development as well as £600,000 of drainage work, which has already been approved.

It is hoped the new facility will boost membership numbers from about 2,890 members now to 3,250 over the next three years.

In May last year existing members voted to support the scheme with 1,118 out of the 1,746 who voted being in favour of the plans.

The south and east facades of the building, housing the entrance and swimming pool, would be single storey to “reduce the scale” to the homes in Phyllis Court Drive and from the river.

The ground floor would be finished in white-coloured render — like the club’s main building — and the first floor would be covered in timber veneer panelling.

Patricia Christmas, chairwoman of the club, said: “We have been anticipating this news for a while and are very pleased that they have given an unconditional approval for us to proceed.

“The next steps are to finalise the finances, sign the design and build contractors and start the more visible work in the coming months. We hope to open the fitness centre in mid-2018.”

Eight neighbours had opposed the plans saying the development would create noise, traffic, dust, light pollution and extra traffic, putting pedestrian’s safety at risk, and be harmful to wildlife.

Paul Lucas, a planning officer for South Oxfordshire District Council which approved the plans, said the development would be in-keeping with the area.

He said: “The proposed development would preserve the character and appearance of the Henley main conservation area and the setting of nearby listed buildings, be in keeping with the landscape, safeguard the living conditions of nearby residential occupiers, provide a sustainable building and would address matters in relation to protected species and flood risk.”

The club says it has a number of planning conditions to follow in relation to traffic, noise and dust, the landscaping in the area and how the club will run once it has opened.

In January 2015 the club’s ruling council unanimously withdrew its support for a larger £4 million project, saying it was not viable.

Five months earlier it had been granted planning permission for a two-storey complex with a gym and swimming pool despite objections from neighbours.

The club has been pursuing plans for a leisure facility since February 2011.

It was working with Nirvana Spa and Leisure on a £7 million leisure complex in the grounds but negotiations broke down.

The plan was to provide a 99-year lease worth more than £40,000 a year for an unused piece of land on the east side of the visitor car park for Nirvana to build the centre.