Volunteers who care for elderly will get the same in return 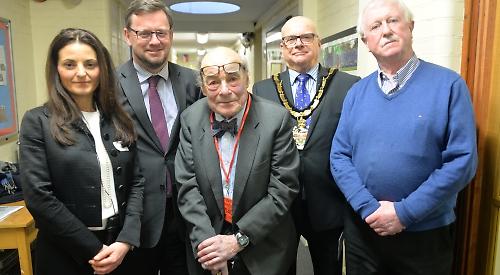 A NEW scheme to encourage people to look after the elderly in exchange for care later in their own lives was launched at the Piggott School in Wargrave.

Give&TakeCare allows volunteers who visit pensioners in their community to build up “credits” to cash in when they are older.

The scheme was devised by veteran TV scientist Professor Heinz Wolff and his colleague at Brunel University, Dr Gabriella Spinelli.

More than 100 people attended the launch at the school in Twyford Road on Friday, including Reading East MP Rob Wilson, Wokingham Mayor Bob Pitts, who is a councillor for Wargrave, and Gordon Storey, of Twyford Age Concern, which is supporting the scheme.

“We hope Berkshire will be a fertile ground for it and that it will spread nationwide.

“Innovative solutions like this are key to making this country a success.

“We are getting back to what used to happen in villages, where people looked out for each other. They didn’t expect payment for it, they did it because they were part of a community.

“We need charities and other local authorities to get involved and take the moral responsibility to look after the elderly.”

Mr Wilson, the minister for civil society, said: “It’s a good example of how social action can work alongside public services to harness people’s will and the quality people can bring.

“I want volunteering to become part of a lifelong habit.”

Prof Wolff said: “This is a change for society where we will care for each other. It will bring new communities, new friendships and an immeasurable increase in quality of life.”

Dr Spinelli showed films of carers visiting elderly people who are charged only £1 per hour of care.

She said: “The only way this can fail is if we as a society stop volunteering and the statistics don’t point towards that.

“We are a nation of volunteers and unless that stops tomorrow Give&TakeCare is not bound to fail.”