Academy to axe support staff to save cash and stay 'sustainable' 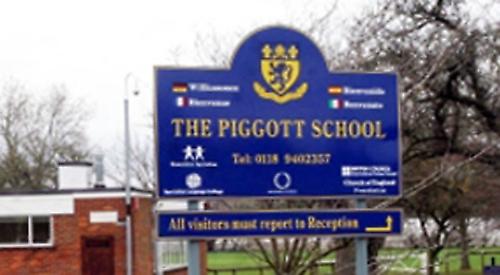 STAFF are set to be axed from the Piggott School in Wargrave in order to save £200,000.

Librarians and technicians are among those expected to lose their jobs at the Twyford Road secondary.

Headteacher Derren Gray has written to parents warning that the school is facing “financial pressures” due to changes in school funding proposed by the Government.

Mr Gray said he had been working with staff and governors to make savings since joining the school in 2014. These included not replacing some outgoing teachers and support staff to “reduce spare capacity”.

However, the school was still facing a deficit unless “substantial changes” were made to staffing.

He added that the previously vacated posts of finance assistant, second IT technician and attendance officer would all be “removed from the staffing structure”, meaning new staff for those roles would not be hired.

Mr Gray said: “It is evident that our current staffing profile is not sustainable. The school’s support staff costs are the second highest area of staff expenditure.

“It has been agreed by the governing body that savings of £200,000 need to be achieved through a process of support staff review.”

Mr Gray said he had implemented other cost-saving measures, including phasing out “uneconomical” courses, increasing the number of sixth-form students and introducing administration charges for school trips. He was also reviewing contractors and suppliers.

He said the school would create a student and staff “support hub” in the current medical room which would home administrative staff rather than having them spread over each department.

The number of hours spent by staff in these roles would also be reduced.

Mr Gray added: “We are not alone; most schools are facing the same financial pressures.”

Helen Craig, who chairs the school’s board of governors, said: “We will continue to work to give children the best education we can and work within our parameters.”

Fellow governor Rev John Cook, vicar of St Mary’s Church in Wargrave, said: “This has been done carefully and we hope it will have the minimum impact. We want to make things as good as they can be.

“We are sorry to be having to make the cuts we are but that’s the only way to sort out the budget.”

The school is in the Maidenhead constituency of Prime Minister Theresa May, who in 2011 praised the decision to convert it into an academy. At the time, she said: “It is great that another local school has successfully converted to academy status. This will bring numerous benefits to pupils and teachers and will ensure that the local area maintains high levels of educational achievement.

“There are now more than 700 academies across the country, the majority of which have converted since this Government came to office.

“This shows that the Government was absolutely right to open up academy status to a wide range of schools.

“I would encourage other local schools to look into this to ensure that standards continue to rise.”

Mrs May’s Government is facing an education funding gap of about £3 billion but has pledged an extra £1 billion for schools with proposals including the removal of free school dinners.

A new funding formula was announced by Education Secretary Justine Greening in December which will see money moved from London and other urban areas that have been well funded in the past to schools in places that receive less money.

The National Audit Office predicted that school funding would reduce by eight per cent in real terms from 2015 to 2020 due to increasing costs and reduced incomes.

In February, the Henley Standard reported that the two schools for younger children in Wargrave would lose a total of more than £130,000 from their annual budgets under the proposed funding changes.

Robert Piggott Junior School in School Hill would lose more than £90,000 from its annual budget, the equivalent of £511 per pupil, and would be forced to lose two teachers.

The infant school in Beverley Gardens would lose £57,000, or £442 per pupil, and would have to scrap one teacher’s job.

Nearby Crazies Hill and Sonning primary schools would also have their budgets cut.

The Conservatives now say that no schools will lose out.