Hardware shop till rifled in distraction theft by women 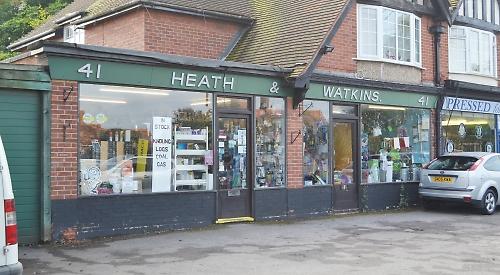 A HARDWARE shop in Sonning Common had £200 stolen from the till in a distraction theft by two women.

The incident happened when 70-year-old Barry Stone was on duty alone at Heath & Watkins in Wood Lane on Wednesday last week.

The women — believed to be mother and daughter — tricked him by asking lots of questions and persuading him to open the till to change a £50 note.

Mr Stone, of Lea Road, Sonning Common, was behind the counter when the women came in at about 3pm.

The older woman asked to buy a tube of ant killer powder but wanted money knocked off the price.

She then asked Mr Stone if he could change a £50 note but when he opened the till she began firing more questions at him so he didn’t notice the younger woman pulling money out of the drawer.

The women then left without buying anything and had vanished by the time the assistant realised what had happened.

They are thought to have been accompanied by a man who kept lookout outside the shop.

Mr Stone, who works in the shop two days a week, said: “They looked like mother and daughter to me and they were speaking in a tongue I did not understand. The older one asked me how much the powder was and the younger woman was interpreting for her. As they came up to me, I went behind the till and the older woman held out a £50 note in her hand. She wanted me to change the note. The younger woman was stood next to me.

“I opened the till and then the mother talked to me as a distraction. In those few seconds the till was open the other woman must have dipped her hand in — I didn’t see.

“They left the shop without even buying anything. I was a bit concerned and then I realised they had taken the money. It was all obviously a distraction and that was how they were trying to work it. It was not a nice experience for me.”

Greg Wheadon, who runs G W Machinery Service and Repair, which is based on the same site, had seen the women outside the shop but didn’t think anything of it until Mr Stone told him what happened.

He said: “I had been outside getting something out of my van when I saw these three characters walking across from the Christian Community Action charity shop.

“I noticed they were talking in a foreign language and watched them walk into the shop. One gave me a bit of a blank look, which I thought was a bit strange. I didn’t think anything of it but after about 10 minutes or so Barry came running out saying he thought the shop had been robbed.”

Mr Wheadon immediately ran into Wood Lane but could not see the culprits. Mr Stone thought they had gone towards Kennylands Road.

Mr Wheadon said: “We think it’s about £200 that’s gone but it’s difficult to say because the shop had a busy morning.”

The shop’s owner Mick Wells, a retired potato merchant, was away on holiday when the incident happened and is not due back until next week.

When villagers heard about the incident they began fund-raising to replace the stolen cash.

Lauren Applebey, 32, of Blounts Court Road, started a crowdfunding page which raised the money within 24 hours.

She said: “Heath & Watkins is a really special shop. It’s a proper, traditional hardware shop — you can go in and they will have whatever you need.

“Everyone I spoke to was really shocked when they found out what happened.

“I set up the fund-raising page and within 24 hours we reached the target. Sonning Common has a good community and I feel people really look out for each other.”

The money will be presented to Mr Wells on Tuesday next week when he returns from holiday.

Mr Wheadon said he had spoken to Mr Wells who had indicated he would donate the money to Cancer Research UK.