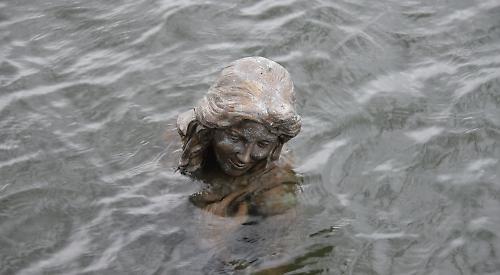 VANDALS ripped a statue out of the ground and then threw it into the river in Henley.

Town councillors have condemned the culprits who struck at Red Lion Lawn, below Henley Bridge, during Tuesday night.

It comes just days after the area was named as a “hot spot” for young people openly smoking cannabis.

The 6ft 6in bronze mermaid statue, which was installed in 2013, was dumped in about 6ft of water, together with umbrellas and awnings, while tables were left upended and broken.

The riverside area, which belongs to Henley Town Council, is used by the Red Lion Hotel to serve customers food and drink during the visitor season.

On Wednesday the head of the 370lb statue was visible above the water but later it was submerged. Staff from Hobbs of Henley retrieved the awnings and umbrellas but were unable to pull out the statue as it was too heavy.

The council was to ask Cook Piling to help retrieve the statue today (Friday).

Henley Mayor Kellie Hinton said: “This is terrible. The fact that the statue has been dumped in the river is extraordinary.”

Councillor Sam Evans, who first proposed installing the statue, said: “It took close to 18 months to persuade those who were sceptical of it so I’m utterly disgusted that someone, or probably a group, has done this.

“All the feedback I’ve had since it went up it that people now love it. It’s part of the Henley scene and has become a landmark. I’m gutted and amazed that anyone thinks this is appropriate behaviour.

“There have been problems with antisocial behaviour on Red Lion Lawn and we have fought for CCTV there, so that’s one good thing that might come out of this, but I didn’t for one moment think it would end up with the statue in the river.”

Sam Gill, who runs the hotel, said: “We have metal tables which are broken and awnings in the river but the most shocking thing is the statue. It was bolted to the ground so someone has gone to a lot of trouble to do this.

“I’ve been here over 10 years and in all that time I’ve never seen anything like this. Little bits and pieces happen sometimes but not this.”

He said he had previously requested CCTV and lighting at Red Lion Lawn.

Once the statue has been retrieved, it will be kept in storage by the council’s parks team until it can be reinstalled. The council will also consider installing CCTV cameras.

The sculpture was donated by Koh Noor, a German company which offered the statues to 20 locations around the world, and was designed by French artist Amaryllis Bataille.

Under the terms of the council’s contract with the company, the piece can be sold at any time for a minimum price of 15,000 euros plus VAT and be replaced with a similar sculpture.

From the proceeds, at least 5,000 euros would be given to a charity chosen by the council and Koh Noor with the rest going towards the cost of manufacturing a new figure.