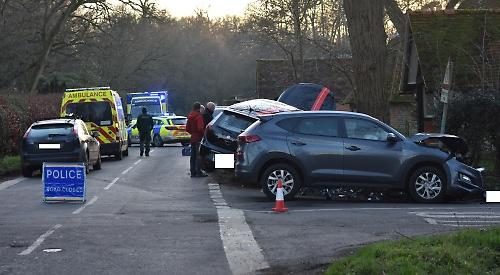 A ROAD in Binfield Heath has been closed following a traffic collision.

The crash happened shortly after 2.45pm on Thursday at the crossroads of Emmer Green Road, Sonning Common Road and Harpsden Road.

Thames Valley Police and South Central Ambulance Service both attended and two people were taken to hospital with minor injuries.

A grey Hyundia Tuscon and a black MG3 were both heavily damaged.

Emmer Green Road was closed by police, but traffic is still able to travel from Sonning Common Road to Harpsden Road.

A spokesman for South Central Ambulance Service said: “We received a 999 call at 2.48pm with the caller reporting a collision between two cars at the crossroads on Emmer Green Road where it meets Sonning Common Road and Harpsden Road.

“We sent two ambulances to the scene and two patients with minor injuries have been taken to the Royal Berkshire Hospital for further treatment.”

A spokesman for Thames Valley Police said the force does not answer media enquiries about minor crashes.