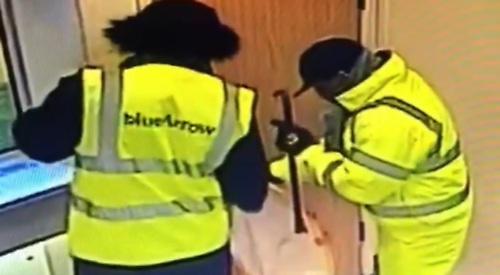 A GRANDFATHER who fought off masked robbers after being hit on the head with a crowbar has been honoured for his bravery.

Sami Barsoum, 71, from Lower Assendon, who still has a scar on his skull from the attack, said: “I don’t really feel that brave.

“It’s nice to be recognised but deep down I feel like I just did what I had to do.”

The retired exchange bureau manager was speaking after being presented with a High Sheriff’s award more than three years after the £50,000 armed robbery in London.

The incident happened as Mr Barsoum was coming to the end of a busy day at the bureau he ran near Victoria station on January 4, 2018. There was just one other member of staff and two customers there when two men wearing high-vis clothing and balaclavas forced their way through the security doors.

Mr Barsoum challenged them but was hit on the head by one of the men with the crowbar and fell to the ground.

He got back up and continued to stand up to the robbers before they fled with bags stuffed with cash.

Mr Barsoum recalled: “When you work for so many years and you are just about to retire, it felt wrong.

“These two guys came in disguised from top to bottom. They were wearing high-vis clothing, balaclavas and gloves, so you couldn’t see anything apart from their eyes. It was about 6pm and one of them was carrying a bag. They just came in and within seconds they came to the door and pulled a crowbar out of a bag.

“They started bashing on the door and trying to open it.

“I didn’t know how to react or what to do because it happened so quickly.

“When they came in, one of them went towards the money and the other one went to keep us out of the way but I tried to fight them off.

“I was angry and was trying to defend everyone. There was a girl with one of the customers.”

The robbers, Cleon Perry and Edmund Brown, who were part of an organised gang, were later caught by police. They were jailed for a total of 37 years at Croydon Crown Court in August 2018 for this and similar offences.

While sentencing the pair, Her Honour Judge Alice Robinson commended Mr Barsoum and nominated him for a bravery award.

Mr Barsoum and his wife Kim attended a ceremony at the Supreme Court in Parliament Square to be presented with a certificate from the High Sheriff of Greater London, Lynn Cooper.

The ceremony was due to take place last year but had to be delayed due to the coronavirus pandemic.

The Barsoums, who have two adult daughters, have lived in Lower Assendon for 19 years. They moved to the area from Osterley in West London as the girls and Mrs Barsoum loved horses.

Mr Barsoum worked at Change Link for more than 40 years when he retired in 2019, a year after the robbery, which has left him with feelings of worry.

He said: “Sometimes, I sit at home and think this sort of thing could happen again, someone could just break the door down. It puts you on edge.

“I look back at it and wonder if I could have done anything differently. It’s always in the back of my mind.”

His wife said he was “too modest” about his attempts to stop the robbers.

She said: “The police said it was one of the worst cases they had seen in terms of the violence the robbers used. When we got the phone call to say what had happened, Sami played it down because he didn’t want us to panic.

“We called him stupid at the time but he was just not prepared to let them take the money.

“The police said we shouldn’t really watch the CCTV footage but it was only when you looked at it that you realised how extreme the violence was. It was quite shocking.”

Mrs Barsoum said her husband had a history of catching thieves.

“He was on the Tube once and he felt he had been pick-pocketed,” she said. “He confronted the guy and grabbed him by the scruff of the neck.

“My husband is not that big but he held him until London Transport Police came and he got his money back. He was not prepared to let anyone help themselves.”

Mr Barsoum’s younger daughter Laura Barsoum-Symons, 37, said: “When you look at the footage, you see how much of a fight he put up. He fell backwards and the guy was still coming at him.

“Head injuries can be so serious and it could have been much worse. We just said, ‘Dad, why didn’t you just let them take the money?’”

His older daughter, Lisa Barsoum-Allen, 40, said: “In court, the judge commented that there was no need for the violence and the guy was really cocky and said Dad should have just laid there and let them take the money.

“They were all quite proud of what they had done and they showed no remorse.”