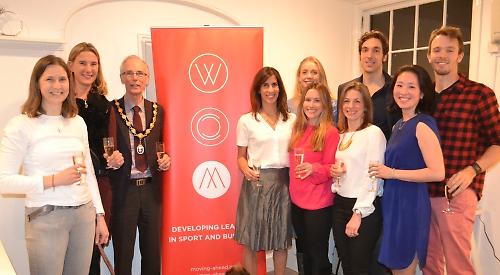 A COMPANY which promotes women in sport and business has moved to Henley.

Women Ahead, which was founded by Liz Dimmock in 2014, held a party at its new premises in Hart Street on Friday. It was previously based in High Street, Wargrave.

The company is a social enterprise designed to improve the prospects of women seeking careers in sport and business and offers mentoring programmes where businesses create partnerships with sportswomen.

It works with athletes such as England rugby player Maggie Alphonsi and bodies including British Cycling and the Lawn Tennis Association. Among the staff are Team GB rowers Sarah Winckless, Monica Relph and Charles Cousins.

Miss Dimmock said: “We are so happy to be in Henley. The team love it here — most of them are local so it’s nice to be in the community and getting involved. We want to do more work locally and this is hopefully the start of that.

“This represents moving out of a start-up business to more of a grown-up organisation and it’s an opportunity to grow.”

In July, Miss Dimmock was named external coaching and mentoring person of the year at the Coaching at Work Awards. The judging panel said her work with Women Ahead had been “consistently powerful and effective”.

In June, the company was awarded gold and silver at the Corporate Engagement Awards for the best collaborative approach, along with partner Ricoh UK.

Meanwhile, a new boutique also opened in Henley on Friday.

East, which sells Eastern-inspired clothes and accessories, has taken over the former Mistral clothes shop in Bell Street, which closed last year.

It was officially opened by the Mayor cutting a ribbon.

The shop is the 30th to be opened by the company, which began as an independent boutique in Fulham Road, London, in 1995.

Store manager Paula Young, who is one of seven staff, said: “I think it’s just what Henley needs — something different and exciting. We’d like to bring new footfall to the town and create interest.”

Jill Ellison, the company’s regional support manager, said: “Henley is exactly the right profile for us with ladies who like to lunch and shop.”