Cottage’s views down the valley are ever-changing 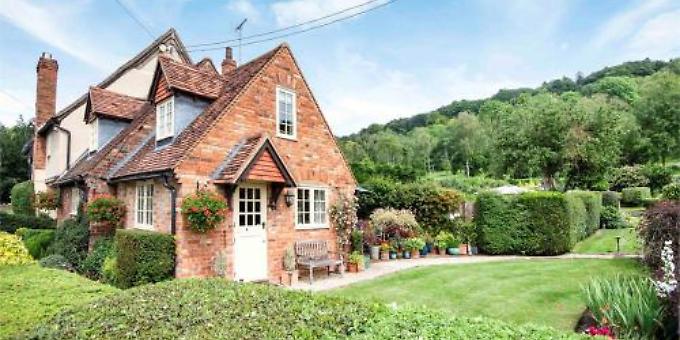 A THREE-BEDROOM cottage with a separate one-bedroom annexe is on the market in the Stonor Valley.

Number 10 Stonor is a Grade II listed character home with an 182ft-long garden that backs on to the Stonor Park estate.

Chrissie Downing and her partner have lived at the property for the past 12 years but are now looking to relocate to Worcestershire to be closer to her son and grandchildren.

The cottage had twice been extended by previous owners, but parts of it are believed to date back to the 15th century.

Chrissie said: “We had a chap from Oxford University come around who carbon-dated the beams and in fact the older part of the property was built in the winter of 1471. They can be that precise.

“That obviously was medieval times, but they’re inclined to think there was a dwelling on this site before that.

“Geoffrey Chaucer’s son Thomas, who served as the Member of Parliament for Oxfordshire, was one of the first inhabitants here.”

Before moving to number 10, Chrissie and her partner had lived in Henley.

She said: “We had it refurbished when we moved in because it had fallen into a not very good state.

“It had been rented out for four years and it needed such a lot doing to it that we didn’t move in for three months.”

The ground floor of the property is mainly divided between the double aspect living room and the triple aspect kitchen-dining room with fitted units.

At the top of the stairs leading to the three bedrooms and the family bathroom is a spacious main landing with exposed wall and ceiling timbers that is currently used as a study area.

With the detached annexe also benefiting from a home office, the property potentially offers an ideal set-up for a professional couple looking to work from home.

At the front end of the detached annexe is a single garage, next to which is driveway parking for three or four cars.

As well as the home office and the bedroom, the annexe also has a walk-in wardrobe and a wet room.

Upstairs in the main house, the master bedroom comes with an en suite bathroom and a separate dressing area.

One of the other bedrooms is currently used as a dressing room and is fitted with plasterboard wardrobes, but Chrissie says it could easily be converted back into a regular bedroom.

She said: “The accommodation is very flexible. It has lots of character and it’s very convenient. The location is really ideal.

“We’re equidistant, I think, from Henley and Watlington, which is 10 minutes’ drive and has some lovely little shops.

“Henley is Henley. The name speaks for itself. There’s also the dog walking, especially up on Maidensgrove Common. That is fabulous and you’re there in five minutes.”

One of the things Chrissie will miss the most about life at number 10 Stonor is the view from the kitchen-dining room.

She said: “I’m going to find it very difficult to replicate wherever I go, because when I stand at my kitchen sink, which is in the middle of my kitchen, I have views down the valley.

“It’s just wonderful because there’s always something happening. It’s almost like living by a river — the view from the kitchen sink provides an ever-changing backdrop, which is really quite something.”

Chrissie is also enamoured of the different views from the garden, which has two patios and a gazebo.

She said: “There’s one patio where it’s lovely to take in the early morning sun. There’s a kitchen patio where the sun is all of the day and then there’s a gazebo up the garden. So you can look at the trees in the morning and then in the evening you can look the other way on to the fields and see foxes — it’s really lovely.

“While the garden is large, it’s really quite easy to maintain because there’s old mature shrubs and not a lot of digging gardening as such to be done.

“The house works well because with the kitchen-diner we live in that part of the house in the summer, essentially, because it’s so light and bright and summery. But then in the winter we tend to spend more time in the sitting room because with the log fire it’s really warm and cosy in there.

“It’s a lovely house to live in, I must say. It just has that feel to it. It’s going to be a hard place to leave, but needs must.”

While Chrissie enjoys living in an Area of Outstanding Natural Beauty with three working farms on the doorstep, she is also a fan of Stonor Park, which in normal times hosts a range of events throughout the year including a craft fair, medieval jousting and Supercar Sunday.

This week it was confirmed that Jools Holland and his Rhythm & Blues Orchestra will play a summer concert at the venue on Saturday, August 14, with the gates opening at 5pm.

Chrissie said: “I think it’s lovely because it brings some life to the village. There’s a fabulous playground for children, so being so close to Stonor Park and all that it has to offer is just an added bonus.”