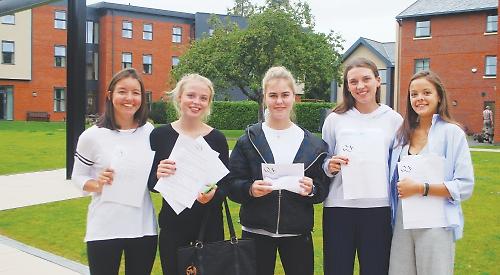 Shiplake College broke its records for the second year running across all its benchmarks.

The pass rate was 100 per cent and the proportion of pupils who achieved an A* or grade A was
51 per cent, up from 41 per cent a year ago.

The proportion of A* to B grades was 72 per cent, compared with 64 per cent last year, and for A* to C grades the figure was 88 per cent, up one percentage point on 2016.

One of the highest achievers was Marcus Bagshawe, from Henley, who achieved A grades in maths and economics and a B in media.

He was also awarded a starred distinction, the equivalent of an A*, in music. He is to study music technology at the University of Surrey.

Marcus said: “I’m looking to go into music production or television and film. I’m very, very pleased but I am going to miss coming to the school.”

Emily Wilkinson, who was head of college for the year group, achieved an A grade in biology and Bs in both maths and philosophy. She is to study biology at Royal Holloway, University of London.

Emily, from Earley, was named the young woman of achievement at this year’s Sue Ryder Women of Achievement Awards for her academic excellence despite suffering from Crohn’s disease and having lost her mother Helen to brain cancer when she was eight.

She said: “Biology is my favourite subject and the university gave me an unconditional offer, so that made it less stressful. I am very, very excited to be going there and I have some friends going there too, so it’s going to be great fun.”

Austin Burnand has also been accepted by Royal Holloway to study geography after achieving an A grade in art, a B in geography and an E in physics.

He was a member of the college first eight that made the semi-finals of the Princess Elizabeth Challenge Cup at this year’s Henley Royal Regatta and sat his physics exam on the day of a race.

Austin, from Maidenhead : “I’m happy with the results considering the difficult time and rowing taking over quite a bit of my time here. At the end of the day I have got into my first- choice university so I am very, very pleased.”

Two of the top performing students were Tia Dinescu and Emily Duncan, who were both awarded three A*s and an A* in their extended project qualification.

Emily plans to read civil engineering at university while Tia will go the University of Cambridge to read English and theology.

“What strikes me is that almost every pupil has achieved at least one or two top marks each, with an average of 140 UCAS points per student overall, the equivalent of AAB. My particular congratulations to the economics, philosophy and art departments for not just excellent value-added scores but also fantastic overall A* to B results.

“The majority of our year 13 leavers are heading for university, with a selection choosing to pursue management and apprenticeship opportunities within the workplace.

“The current figures indicate that 96 per cent of students have got into their university of choice — another record broken.

“The range of degrees that our year 13 leavers are going on to do is remarkable, perhaps reflecting the ever-changing landscape of education and employment, and certainly reflecting the exceptional and individualised careers guidance they receive at the college.

“From ocean science to mechanical engineering, architecture to forensic psychology and real estate management to creative music technology, I have no doubt that our pupils will go on to be successful in a wide range of interesting careers.

“This would not be possible without the pupils’ hard work and determination, along with an even greater focus on performance tracking and reporting processes post mock-exams.

“Over the last five years we have demonstrated we have done the best for the majority of our students. I am hugely proud of this group of leavers and all they have achieved; my thanks to the parents and staff for giving them such valuable support and guidance.”

At Queen Anne’s School, a girls’ school in Henley Road, Caversham, the pass rate was again 100 per cent.

Thirty-six per cent of grades were A* to A, up two per cent on last year, and proportion of A* to B grades was 66 per cent compared 64 per cent a year ago.

The proportion of A* to C grades fell from 88 per cent last year to 86 per cent.

Kate, one of school’s head girls, said: “Economics was my favourite subject and I loved Durham when I went to visit. I got the grades I needed so I’m really happy. The course I’m doing is four-year, including a year in industry, so it will allow me to get work experience.

“I have loved my seven years at the school — I have had a great time.”

Another stand-out performer was Olivia Dunning, from Henley, who achieved an A* in economics, A grades in maths, Spanish and English literature.

Earlier this year she won the Floella Benjamin prize at the school’s speech day as well as the economics prize. Next month she will join the apprenticeship scheme at accountancy giant EY in London.

Olivia said: “I just wanted to go out and work and, I guess, not run up a debt at university. I love working, especially things which are client-based. I’ve just finished working at Waitrose in Henley. I didn’t need to achieve any particular results but I am really pleased because I felt I did my best.”

Eliza McCreery, from Henley, secured her place at Leeds University to study geography in September 2018 as she plans to have a gap year teaching sport in Fiji.

Eliza, who was captain of the school’s lacrosse team, said: “I’ll also be doing work in construction and some sports coaching. I got into the university I wanted so I am very happy but I’m sad to leave the school.”

Deputy head girl Britta Anderson, also from Henley, achieved A grades in chemistry, maths and Spanish and is to study chemistry at university.

Holly Webb, from Henley, will study fine art at Newcaste University after being awarded A*s in art and design and in psychology and a B grade in English literature.

She was the school’s first ever rowing captain.

Susie Liddell, from Henley, achieved A grades in maths and further mathematics and a B in physics and will be going to Glasgow University to study product design engineering.

Susie, a prefect, also won the Aubrey Award at speech day for her contribution to the sixth form community.

Nicole McKay, 18, from South Stoke, will study psychology at the University of Warwick after achieving an A* in geography, an A grade in psychology and a B in biology.

Headteacher Julia Harrington said: “We are all very proud of our girls and their results reflect what a fantastic year group they have been. They all have bright futures ahead of them as they go on to university, apprenticeships and voluntary work — they, along with their teachers, should be congratulated.”

High achievers included the school’s sole Oxbridge entrant Ramon Krah, from Oxford, who will study classics at Cambridge after achieving A grades in Latin and Greek and a D1, the highest possible grade in the Cambridge Pre-U in philosophy and theology.

Angus Webster, from Crazies Hill, will study biomedical science at the University of Manchester after achieving A grades in geography and maths and a C in biology.

He said: “I was pretty happy with the results. I’ve got into my first choice university and that’s good enough for me.”

Headteacher Joseph Smith said: “We’re really pleased with the results and feel the boys and teachers have both done a great job. The boys worked incredibly hard and the staff were dedicated to supporting them and we’re delighted with the outcome.”

Reading Blue Coat School in Sonning recorded its best ever A-level results and a 100 per cent pass rate.

The proportion of A* and A grades was 48.3 per cent compared with 45 per cent last year.

Gabriella Thiele, from Charvil, won a place at Bournemouth Art College to do an art foundation course and her twin brother Rory will go to Exeter University to study geology.

Headmaster Jesse Elzinga said: “These results are fantastic and I am so proud of what our pupils and teachers have accomplished.

“As we move to linear A-levels and the Government makes examinations more rigorous, I worried we might see a slight dip in our results.

“On the contrary, we have achieved the best results in the school’s history by a considerable margin.

“Congratulations to our leavers on these superb results and I wish them all the best as they embark on their university courses.”

Robert Harris, from Henley, and Freddy Bermingham, from Goring, were among the top performers at Abingdon School.

Robert, a member of the school’s first eight, will go to the University of Camridge to study engineering after acheiving four A*s.

Freddy was awarded an A*, an A grade and a B and will go to the University of Bristol to study psychology.

Susannah Barton, from Henley, achieved an A* and two A grades at the Abbey School in Reading. She won a place at the University of Bristol, her first choice, to study biochemistry.

At St Helen and St Katharine School in Abingdon, Florence Wiggins, from Kingwood, won a place at Cambridge University to study geography after achieving A*s in geography, English and chemistry.