One school takes all the prizes at public speaking contest 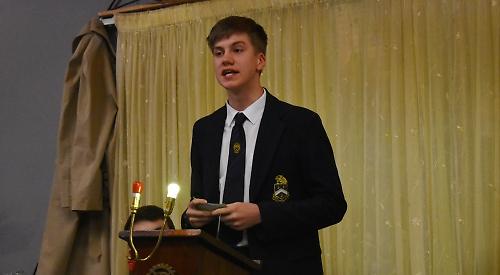 ONE school swept the board at  a public speaking competition for young people in Henley.

Pupils from the Abbey School in Reading won both sections of the local heat of Youth Speaks as well as all the individual prizes.

The competition is run annually by Rotary clubs across the country and culminates with a national final.

The Abbey was one of three schools, together with Langtree in Woodcote and Reading Blue Coat in Sonning, competing at the event held at the Henley Amateur Operatic and Dramatic Society studio, next to the Kenton Theatre in New Street, on Wednesday last week.

The contest was split into an intermediate section for 11- to 13-year-olds and a senior section for 14- to 17-year-olds. Each of the seven teams was given 10 minutes to speak on their chosen topic to an audience. Each had three people, a chairperson, a main speaker and a speaker to give the final vote of thanks. The children’s chosen subjects included driverless cars, self-care and the “tampon tax”. The Abbey team won the Henley Rotary Club Cup for the intermediate section with a talk on “lost words” — those removed from the Oxford Junior Dictionary. Erin Behlic won the Gabrielle Derbyshire Cup for the best speaker in the section and Jigya Kayshap won the David Walden Cup for the best overall chairperson. In the senior section, the Abbey won the Rotary Shield for their talk on “the importance of non-verbal communications”.

The competition was judged by adjudicators Tony Searby, Nansi Diamond and Tom Hostetler.

Peter Thomson, president of the Henley Rotary club, said: “It was a successful evening. We saw excellent performances from all the teams and were particularly pleased to see Langtree there for the first time. The quality was excellent and it was a great example of young people preparing for the future.”

The winners go forward to the next round in Marlow on Thursday.