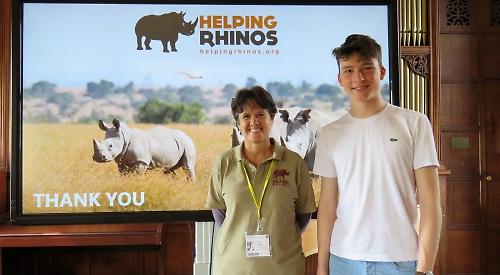 TRACEY TAYLOR, education officer for the Helping Rhinos conservation group based, spoke to students, parents and staff at Reading Blue Coat about the world’s rhino crisis.

A century ago, the world’s rhino population was around half a million but today it is less than 29,000 with 90 per cent the animals in Africa.

The numbers have dwindled because of habitat loss caused by the growing human population, deforestation and drought as well as poaching.

Tracey said the situation had the tipping point where rhinos were not being born quickly enough to replace the rhinos that were being killed by poachers and rhinos in the wild will be extinct within 10 to 15 years.

She is picture with head of school Ollie Pink, who wants to pursue a career in animal conservation.