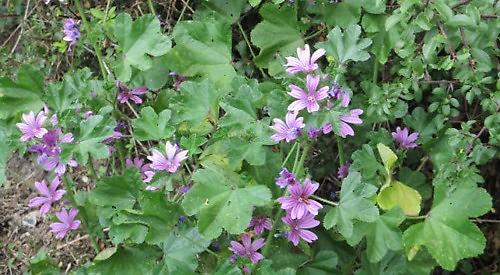 MAPLEDURHAM is a very old place indeed, how old I don’t know but it is quite a serene hamlet.

The Elizabethan house and watermill are quite rightly famous but as we depart from St Margaret’s Church I’m more taken with the little almshouses to our left.

My friend Matt Coome and I have not come here to admire the architecture and discuss history though. Instead, we’re off to visit the old lane towards Hardwick that begins by the White House (reportedly once the village pub) and a hillside beyond.

This old bridleway takes us to the north-west. Today, bright and sunny, is dry and chalky underfoot and easy going as the path rises gently.

A few years back it was difficult to progress through this way on foot, bicycle or horse as brambles were taking over so there has obviously been some sympathetic clearing work done.

There are still brambles of course, they’re in flower and have many pollinating insect visitors. I’m rather pleased to see all the spindle, hawthorn and blackthorn bushes that are growing mainly to our right-hand side between the track and a field of maize. Black bryony clambers through their branches.

After 50 yards the lane broadens out slightly and below the hedgerows many flowering plants are present. Of the largest the dusky-hued mugwort, common mallow and black horehound, with their pinky-purple flowers, are accompanied by the white-flowered bladder campion.

The delicate lilac-flowered vervain, the slender agrimony and perforate St-John’s-wort with their yellow blooms are scattered here and there. Hedge bedstraw is having a field day.

All along the way the small heath (Coenonympha pamphilus) and gatekeeper (Pyronia tithonus) butterflies attend to flowers or simply bathe in the sun.

Badger runs and rabbit warrens are a feature to our right. We don’t see any rabbits though and I’ve only once seen a badger in daylight.

We stop to look across at the River Thames that is shining and an even deeper blue than the sky. You can smell its scent from here. Mingled with that of the earth and the summer flowers it is one that I dream of in winter.

Before we move on a pair of meadow pipits fly low over the other side of the flimsy wire fencing towards the village. We spot a club-tailed dragonfly (Gomphus vulgatissimus) at rest on the chalky path besides us. This species has a distinct club-like abdomen with quite beautiful wasp-like golden and black rings. It seems oblivious of our presence.

Further along wild mignonette and some spearmint plants spill into the lane. Wild basil, silverweed, creeping cinquefoil and herb-Robert add to the mix. It’s quite a lane.

We reach a stout kissing-gate on our right. Tree roots act as steps. A pair of pyramidal orchids are in full bloom to either side. We are stood below Westfordhill, a location that I wrote about back at the beginning of April when looking forward to seeing this summer’s grassland flowers. I’m not disappointed with what we see before us. All that I had anticipated but more.

Pyramidal orchids that I did not expect are growing like red clover and there is plenty of that too. Bird’s-foot trefoil and Lady’s bedstraw are in proliferation, common and greater knapweed and wild marjoram are providing a feast for marbled white butterflies (Melanargia galathea).

At the top of the public footpath a pearl-bordered fritillary (Boloria Euphrosyne), one of my favourites with its stunning dark-speckled orange colouration flutters, about near the woodland edge.

After Matt drops me back home I phone Dave Kenny and we arrange to visit some days later as I want him to see the hillside. I’m glad I did as a week later there’s more. Wild thyme, common restharrow, black medick, salad burnet, weld, goat’s beard and field scabious are out now but what I love most is the clustered bellflower with its violet-blue flowers (Campanula glomerata), locally common only in the south-east.

One thing worries us. This site is not protected. The sheep went years ago but will a new flock be installed, can anything be done?

On this note we leave and return to Dave’s car and decide to move on and visit two different sites that we’ve known for some time. Both harbour colonies of orchids and again both sites are not officially protected. The first near Wyfold is home to a large colony of broad-leaved helleborine (Epipactis helleborine). We count more than 30 plants and all look healthy. They will be in full bloom in another 10 days or so.

Someone has taken the trouble to clear some scrub around them to let in more light and has also erected a small barrier to prevent crushing by vehicles.

The second site is by Three Corner Common and Ipsden Heath and home to the largest concentration of the nationally scarce violet helleborine (Epipactis purpurata) that Dave and I know of. They once thrived here and some 20 years ago I lost count of these distinctive, statuesque plants.

Then some 10 years back disaster, the roadside verges had been flayed and most of the plants decapitated before they could set seed. Dave subsequently had a meeting with Oxfordshire’s county ecologist and highways management staff in an attempt to save the orchids via a management plan.

Today nothing has improved. I feel very sad. Once again we find clump after clump decapitated all at the same height so I can rule out the browsing of animals. A few have survived but they are beside a telegraph pole or just out of range of machinery.

So what can we do, erect ugly cages around them? I don’t know the answer. It is just a great shame that so much unwarranted destruction goes on year after year. We are already losing so much — can’t we save just a little?