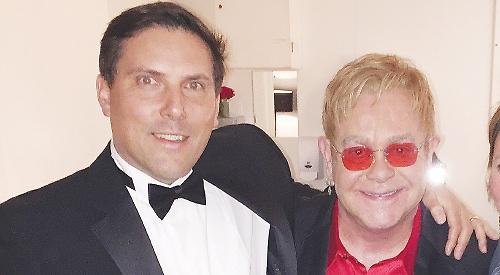 THE new boss of the Rewind festival is enjoying running an event featuring pop stars he remembers from his childhood.

Paul Carey is busy planning the Eighties music extravaganza to be held on Temple Island Meadows in Remenham in August for the ninth year running.

The 45-year-old became general manager of the festival after it was bought by radio group Global as part of a £30 million deal last year.

It was one of a number of events sold by Impresario, whose chief executive David Heartfield lives in Rotherfield Greys.

After two years, Mr Carey will succeed Mr Heartfield, who founded and then expanded Rewind.

He has already spent 20 years working in the music industry as a publicist and manager, promoting artists including David Bowie, Elton John and Dame Shirley Bassey.

This year’s Rewind will feature headline acts Status Quo and Village People as well as Level 42, Gloria Gaynor, Midge Ure, Kim Wilde and Belinda Carlisle, among many others.

Mr Carey, who lives in Henley, says: “I was born in 1972, so I’m a child of the Eighties and Rewind is right up my street.

“All these acts — I bought their albums on vinyl. It’s a real joy to work with these artists who really were a soundtrack to my formative years.

“I’m in a really fortunate position to be mentored by David who founded and put this whole thing together over the last nine years.

“He has been promoting events for the past 40 years, so I’m learning from the master if you like.

“I’ll gradually take over from David over a couple of years. For this and the next festival David’s here and fully involved and after that it’ll be left in my capable hands.”

Mr Carey, who is married to Julia, a jewellery designer, says Rewind is “just good fun” for 20,000 people who attend each day of the weekend festival.

“It’s safe and there’s something about that setting by the river,” he says. “There’s everything you could possibly want there and the people are in great spirits. It was the soundtrack to their youth and they are reliving that.

“Part of the fun is people come in fancy dress. There are more Day-Glo outfits than there ever were in the Eighties!”

He is already thinking about the line-up for next year’s festival, which will mark the 10th anniversary of Henley Rewind. An identical festival was added in Cheshire in 2014 and in Scotland in 2011.

“I’ll listen to the fans and try to create the perfect Rewind line-up,” says Mr Carey. “It’s no mean feat putting together a line-up for three festivals — two days each in three different locations. It takes about four months to get the line-up locked in.

“We go through every aspect from which food vendors and which traders come on site to how the camping is working. It’s a long to-do list.”

Mr Carey, who moved to Henley from London in 2011, first met Mr Heartfield some years ago on the advice of Howard Jones’s manager.

“It was ‘this is who I am, and what I’ve done’ and that was that really,” he says. “Then I got a call from David probably around March last year. He said ‘do you want to come in? There might be something for you’.

“He just wanted to touch base to see if I was interested. Of course, I was and it went from there.

“I have been around and working on festivals my whole working life. It’s really about knowing how events are put together and having the contacts.

“There are key people, managers, producers and others, that you need to put a festival together and to have a relationship with. The other side of it is the artists, so you need to know the agents and managers and have relationships with them too.

“It’s pulling them altogether in one place at one time for a festival. The reason Rewind is so successful is because we have very good people in place who know what they are doing.”

Mr Carey began his career in the mid-Nineties after taking a degree in electrical and electronic engineering at Northumbria University.

“I guess I always wanted to work in the music industry,” he says. “My dad was in a band and they used to rehearse in our front room once a week so there was always lots of music in our house.

“I can remember buying records as a child and looking in the middle of them and seeing the names there and wanting to be part of that.

“But to get your foot in the door, it’s really about who you know.”

His break came through a photographer friend, Andy Wilson, who had a studio in London which he shared with a woman who had a friend who worked for a PR company.

The woman turned out to be Steph Pegg, daughter of Dave Pegg of Fairport Convention.

At the time the company was handling the publicity for Radio 1 and its Sound Cities project, which focused on the music scene in different cities around the UK.

Mr Carey recalls: “The following week I was backstage at all these amazing venues, hanging out with Steve Lamacq, Jo Whiley and Radiohead.

“I had to move to London and live on £200 a week and ended up sleeping on Andy’s floor and then got a flat.

“The company was working on the Brit Awards. It was a complete dream, going to lots of parties, events and gigs. It took a while for my mum and dad to work out what I was actually doing!”

In 1998 when Stevie Wonder played at the Brits, it was his job to escort the singer to and from the stage.

Mr Carey recalls: “I remember his breath on my shoulder as I was guiding him. Things like that make the hair on the back of your neck stand up.”

The company also worked with the Rolling Stones when they played at the Shepherd’s Bush Empire.

Mr Carey says: “I would take the band down to the photocall. You’re 25 and walking with the Rolling Stones to a photocall. It was quite mad.

“It’s an honour to have worked with some of these big names and it has been good fun.

“Something like the Brits, that’s the biggest thing happening in the music industry. You feel like you’re part of something really special.”

Mr Carey stayed at the PR company until the late Nineties when he moved to the Outside Organisation, which had just taken on Elton John as a client.

He recalls: “On my first day I came into the office and they said, ‘how do you fancy working with Elton John?’ and I said, ‘fantastic’. He was someone I really admired.

“For three or four years I was his personal publicist so I ended up travelling around the world with him.

“He had been in a bad place with his relationship with the media so it really was a case of turning that around. Everything was actually about his lifestyle and we put the focus back on his music and what a great artist he was.”

Mr Carey caught up again with the singer when he performed at last year’s Henley Festival.

In the early 2000s, he also ran PR campaigns for David Bowie to promote his albums Heathen and Reality.

“He was quite a tough task master,” says Mr Carey. “If you didn’t know the answer to a question he’d say ‘go and find out’.

“When I left the Outside Organisation to go travelling in 2003 he sent me a really nice email.

“He had given a speech in Berkeley University in 1999 where he told students ‘if there’s an itch, play it’, trying to motivate them to go for it.

When he returned from travelling in 2004 he worked as a freelance and decided to make the move into management and his clients included Shirley Bassey.

In 2007 he started his own business, the Music Management Company and the same year he was with Dame Shirley when she performed at the Glastonbury festival.

The pair then worked together on the 2009 album The Performance, for which other artists wrote the songs for the legendary Welsh singer. Mr Carey signed up the Pet Shop Boys, Gary Barlow and KT Tunstall.

“It was a great result and it gave me a calling card.”

Tickets for Rewind are now on sale. Visit www.rewindfestival.com