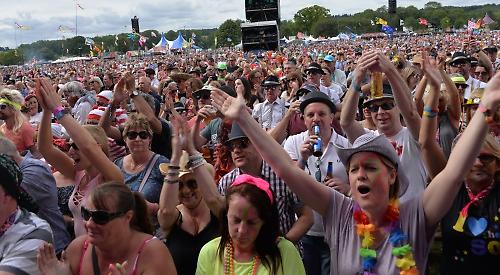 MORE than 32,000 people descended on Henley for the ninth Rewind South festival over the weekend.

The Eighties music extravaganza, at Temple Island Meadows, was headlined by Gloria Gaynor and Village People on Saturday with Quo closing the festival as headliners on when it was wet.

The group performed a tribute to pop legend George Michael, who died at his home in Goring last year.

Many festival-goers dressed up for the occasion including in neon colours, wigs and fancy dress as Mr Blobby, the Flintstones and whoopie cushions.

Among the revellers were Nia and Phil Ashton, of Haywards Close, Henley. They dressed up as Penelope Pitstop and Dick Dastardly from Wacky Races.

Mr Ashton said: “We love coming to the event because it’s a fabulous event. We have our son looked after on and then we bring him down on .”