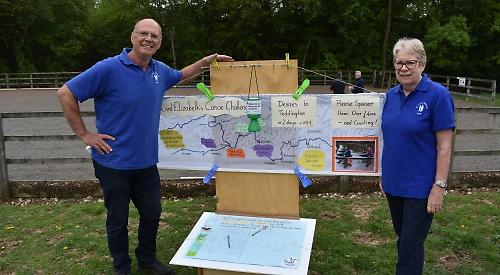 HUNDREDS of people attended a fun day at Wyfold Riding for the Disabled.

The annual event is a thank-you for the charity’s clients and their families.

Attractions included a carriage driving display by Helen Towner and Jacqui Harris with Lucky the pony.

The charity has an adaptable carriage to allow wheelchair passengers and drivers to use it.

There were also traditional games, a barbecue, cake sale, beat the goalie and face-painting.

Children could ride one of the charity’s horses, guided by volunteers.

Organiser Jill Knight said: “We were very pleased with the turnout. The pony rides were very popular, as always, and visitors were impressed by the display of carriage driving.

Meanwhile, the charity’s stable manager Elizabeth King, from Caversham, and her father Nick raised more than £4,000 when they paddled 125 miles from Devizes to Westminster last month.

They had been due to take part in an official two-day event but this was called off on the second day due to heavy rainfall that made it dangerous for the paddlers, so they did their own.