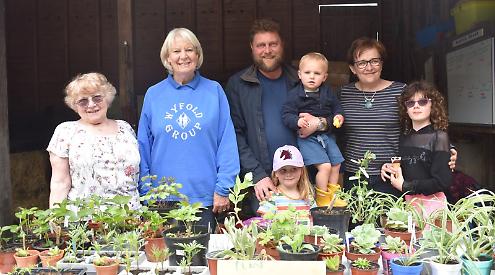 A FUN day at Wyfold Riding for the Disabled raised a record amount.

The independent charity provides riding facilities and lessons for people with physical or mental disabilities and has about 80 volunteers.

Young riders and their families were among those who attended the event at Wyfold Court in Lime Avenue.

Attractions included vintage tractor rides for the first time, which proved to be very popular, and a plant stall.

There were also children’s games, a barbeque, tombola and raffle as well as tea and cake.

“I think the large turnout had a lot to do with the weather but a lot of people also came for the tractor rides and to support us after three years of no fun day.” The event raised £1,815 with the plant sale contributing £292 and the tractor rides £248. The previous record was £1,400, set in 2019. The money will be put towards a new driving pony to replace Lucky, who went lame after serving the charity since 2013. A driving pony is used to pull carts and carriages.

Mrs Rushworth said the need was urgent, adding: “We’ve had no luck so far in finding the right pony, which is very important because they have to like the work.”

The vintage tractor was loaned and driven by Nick and Angela Sanders and the trailer to carry the passengers was provided by Nicholas and Sandie Bartholomew, who are all members of the local tractor club.

Mr Bartholomew is a former chairman of Woodcote Steam Rally and his wife worked with Mrs Rushworth at Checkendon Primary School, where they became friends.

Mrs Rushworth thanked the volunteers, saying: “They worked so hard. They were wonderful and the atmosphere was so lovely.”