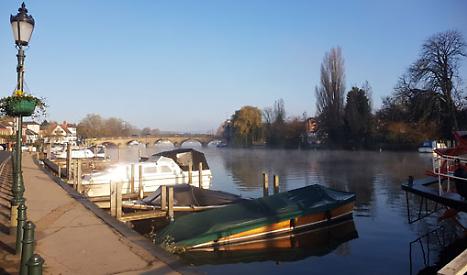 A YOUNG mother was rescued from the River Thames in Henley after jumping in to save her baby.

Staff from Hobbs of Henley came to the woman’s aid after hearing her screaming because she couldn’t pull herself out of the water after rescuing the tiny boy.

They said that had she remained in the freezing water for much longer she might not have survived.

The drama happened as the Charvil woman was pushing her son in a pram along the towpath near the bandstand in Mill Meadows on Friday afternoon, accompanied by her other child, a girl aged about three.

She was attending to the older child when the pram rolled into the river, so she leapt in after it.

She managed to unstrap the baby from the pram and place him on the bank but, unfortunately, there was no one else there to help. The woman was up to her shoulders in water and couldn’t manage to haul herself out so she screamed for help.

Her yells were heard by Andy Trust, boatyard services manager for Hobbs, who was at the company’s yard on Wargrave Road on the far bank and could see the woman in the river.

He called the company’s offices in Station Road to alert managing director Jonathan Hobbs and general manager Kim Clifford who grabbed a life ring and ran along the towpath. At the same time, Mr Trust and his colleague Darren Martin, skipper of Consuta, got into a powered dinghy and went across to help.

The men arrived within a few minutes to find the woman still holding on to the bank just feet from her children.

Mr Hobbs and Mr Clifford each held an arm as they pulled her out of the water and then all four men rescued the pram as well.

Mr Clifford said: “She could not get out because the bank was too high, so we pulled her out.

“She did very well to manage to release the baby and put him on the bank because there were a lot of straps.

“If she had not got the baby out it could have drowned. The water was right up to her shoulders but she managed to put the baby as far from the water as she could.”

Mr Trust, 54, from Caversham, said: “I was working on a boat when I heard someone screaming and shouting.

“I looked through the window of a boat and could see someone in the river. I phoned the office because our tug was not here but we found an inflatable dinghy and went over in that.”

After the rescue, the men took the trio to their office to dry off and warm up. The baby, who was calm and did not cry during the ordeal, was wrapped in some clean towels.

Mr Hobbs’s wife Suzy, the company’s business development manager, helped look after the children while their mother changed into some spare overalls and a branded jacket.

Mr Clifford said: “The baby was pretty calm but the lady was pretty shocked from the cold. If our staff had not heard her I dread to think what happened. She was lucky.

“We offered her use of the shower but she was fine. Then we gave her a change of clothes.

“I went round to Mill Meadows car park to get her car and get the engine running so the car was warm.

“We offered to take her to the hospital or drive her home but she said she was happy to drive herself home.”

Mr Clifford, who has worked for Hobbs for 36 years, said he would like to see steel ladders installed at intervals along the river bank to help people who get into trouble in the water.

He said: “It would help if someone falls in or has to jump in as they could get out on their own.

“It was very quiet there when this happened. There was only one other person about.”