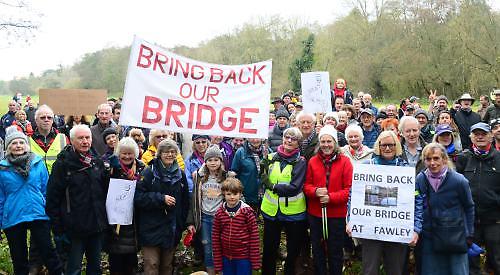 MORE than 150 campaigners took part in a protest to express their frustration at the closure of a footpath near Henley on Saturday.

The path along the River Thames was closed at Fawley Court by Buckinghamshire County Council more than a year ago.

The county council shut the route after a wooden bridge collapsed, but attempts to repair or install a new bridge have been hit by a series of delays.

Protesters gathered at the start of the route opposite Henley Rugby Club from 11am and walked to the wooden barricade.

Campaigners from both sides of the water turned out for the demonstration, calling for the bridge to be reinstated.

Many of them said the alternative route along Marlow Road was dangerous, particularly for families with young children.

James Lambert, who was one of the organisers of the protest, said: “It is a brilliant turnout. It is quite sad that it has had to come to this.

“There have been so many opportunities for the bridge to be brought back. If we are still here in another year, which I would not be shocked by, then it would be a great shame.”

Police arrived at the scene shortly after 10.30am and followed the protesters down to the barricade.

Here, Kate Ashbrook, the general secretary of the Henley-based Open Spaces Society, addressed the crowd and urged them to keep up the pressure.

The county council, which is responsible for the narrow bridge, says it has been in talks with the owners of Fawley Court to progress the matter.

A new bridge was due to be installed in June, but contractors were unable to carry out the work because of poor weather and were delayed until August to avoid clashing with Henley Royal Regatta.

The estate has said it shares the public frustration.