Pupils stage their own wedding ceremony 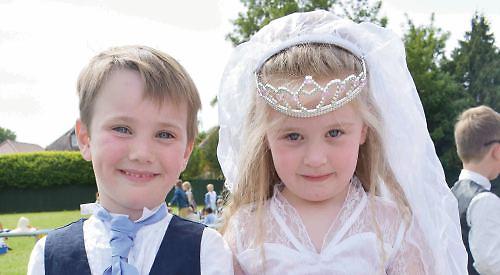 PUPILS at Robert Piggott Infant School in Wargrave staged their own wedding ceremony.

The roles of the bride and groom were played by Amber Wontner-Smith, five, and Charles Monte, six.

They wore a wedding dress and waistcoat respectively while other children played the best man, flower girls and page boys for the mock ceremony.

Wargrave curate Hugh Barne visited the school wearing wedding robes to teach children about the symbolism of the ceremony.

Head of school Jill Nixon said: “It was about learning what a wedding is and who the royal family are. We had the wedding in the hall and then the children came out with a plate of food and we had a party in the field.

“The groom gave a speech and there was country dancing.

“The children had a great time and really enjoyed it. It was a super day.”