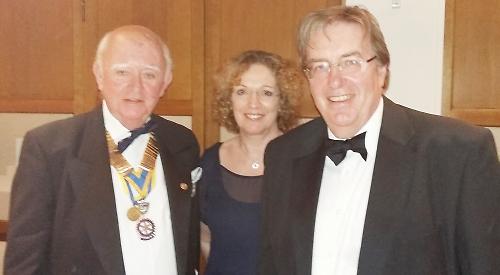 JOHN HOWELL, MP for Henley, was the guest speaker at the club’s president’s night, which took the form of a reception and dinner at Leander Club.

Each Rotary club holds a president’s night towards the end of the Rotary year on June 30 to which friends and other local Rotarians are invited. The aim is to thank members for their support during that president’s year of office.

After the meal, president Ian McGaw awarded a Paul Harris Fellowship to Annie Lathaen for her unstinting services to the club.

He then asked Malcolm Leonard to welcome Mr Howell as the speaker.

In a light-hearted talk that included many amusing anecdotes, Mr Howell recalled his 10 years as MP for Henley and the work he has done both locally and in Parliament. He has chosen to have a portfolio career in politics which includes, among other things, being a member of the Council of Europe, a trade envoy to Nigeria and a UK-wide ambassador for neighbourhood planning.

Despite its name, the Henley constituency stretches as far north as Bicester and it borders Reading.

As a consequence, the MP is also involved in issues such as a possible third runway at Heathrow airport and the repercussions of the planned Oxford to Cambridge expressway.

Mr Howell said he was troubled by the national media’s propensity to pit opposing forces against one another, when in fact there was much bipartisanship in Westminster Hall, the second chamber of the House of Commons, and lots of co-operative teamwork in the committees.

He saw Prime Minister’s Questions as a time when civility went out of the window and, sadly, these were often the only exchanges that appeared on TV and radio.

Mr Howell said that when following the national media one might believe that all politicians were totally focused on Brexit, whereas in fact there was a prodigious amount of valuable work being done in many other areas of government.

He also touched on the pressure on MPs from social media that had developed in the 10 years since he was elected. MPs sometimes found the bitterness, bitchiness and raw rudeness unbearable.

Nevertheless, it was an enormous pleasure and privilege to be a constituency MP.

President-elect Paul Harrison gave the vote of thanks.

The Rotary Club of Henley Bridge invites business and professional people in Henley to join the largest social club in the world.

When you join Rotary, you become a member of a vast international social club of 1.2 million members worldwide. You will be welcome — even encouraged — to attend any of the 33,000 clubs in more than 200 countries and geographical regions. This social bond creates an instant sense of belonging, wherever you are in the world. Many a member in need of a doctor, lawyer, hotel, dentist or other expertise while travelling has found assistance through Rotary.