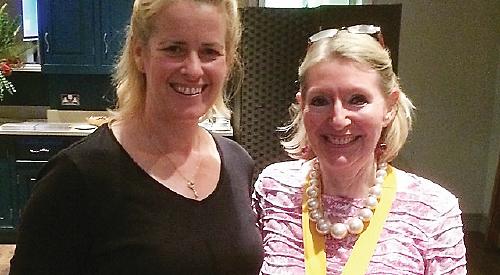 MEMBERS were delighted to welcome Jennifer Holmes to their Wednesday speaker’s evening in August to talk about her adventures ocean racing.

Jennifer was born in Cape Town and lived there until she finished her university education.

She briefly lived in America before settling down in England with her husband and two sons.

In 2013 she wrote a “bucket list” which included learning to sail.

Rather than a gentle start, she signed up to take part in the 2015/16 Clipper Round the World Yacht Race.

Jennifer crewed for leg 7, which is from the west coast of America through the Panama Canal to the east coast.

She enjoyed the adventure so much that she crewed again in 2017/18, this time for leg 5 from Australia to China.

Before the talk started in earnest, Jennifer showed us a short film of life on board, where conditions are rather cramped and the cooking facilities are not five star!

We also saw her yacht sailing in different weather conditions — rough weather was definitely not for the faint-hearted!

Everyone on board has to take their turn with the different tasks, keeping the yacht sailing 24 hours a day.

Jennifer said that none of the crew ever got enough sleep.

She hasn’t ruled out crewing again but in the meantime is keeping herself busy and fit by taking part in a number of fund-raising challenges, including the Thames Path Challenge, the Breast Walk Ever and the Chiltern 50km.

She has recently taken up running and will be entering the Henley Standard 10km on Sunday, October 21 together with one of her sons.

The event coincides with the Henley half marathon and both are organised by the Rotary Club of Henley Bridge.