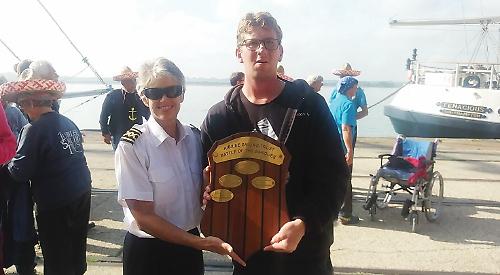 He was part of the crew of STS Lord Nelson, which won the Battle of the Barques — three separate races held in the Channel.

His trip was sponsored by the Rotary Club of Henley Bridge as part of its ongoing commitment to the Henley community.

Lord Nelson is a three-masted square-rigger in the fleet of the Jubilee Sailing Trust, a charity which promotes integration between able-bodied and disabled adults through the medium of tall ship sailing. This is achieved by enabling a mixed ability group between the ages of 16 and 70-plus to crew a ship at sea.

The trust operates a buddy system where two people are paired together, one able-bodied and one disabled. They share the voyage and help one another along the way.

Mr Carr, who was educated at Bishopswood School in Sonning Common, and Berkshire College of Agriculture, was accompanied by his father Russell, who recently retired.

The environment is unusual and takes people out of their comfort zone. People who were once unknown to each other and from different backgrounds very quickly come together to work as a team.

Mr Carr Snr said: “John made many new friends and was quite emotional when the time came to leave the ship.

“For me it was a real eye- opener to see so much teamwork and friendship among the wide variety of ages and abilities on board. Everyone contributed to the victory.

“We would like to thank the Henley Bridge Rotary Club for sponsoring John on this fantastic voyage.”