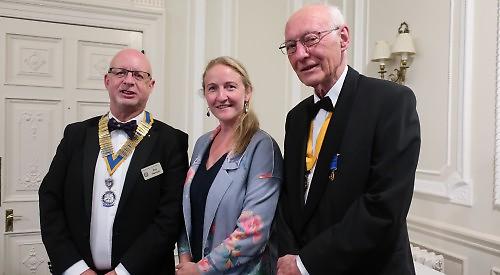 THE club held its president’s night and handover meeting on Wednesday, June 26 at Phyllis Court Club in Henley.

The dinner was hosted by outgoing president Paul Harrison who handed over the presidency to Malcolm Leonard.

Malcolm said he was delighted to become president for a second time, having previously held the role in 2003/4.

The president-elect for 2020/21 is Annie Lathaen and the junior vice-president is Frank Banks.

The speaker was Jo Southwell who is an actress and film director and director of the Henley Fringe and Film Festival.

Jo made her film debut with a short entitled Holding On, which is about a man’s struggle with the onset and effects of Alzheimer’s
disease.

Now she is an award-winning short film-maker and has been a film judge at several festivals.

Jo spoke of her love of film-making and her connections with the fringe and film festival.

The club started its new Rotary year with a talk by Richard Walker about the geology and geography of Iceland on July 17.

Richard spoke about a split of the North American and Eurasian tectonic plates, which are moving away from each other and causing interesting geological changes.

His talk concentrated on what would be the key things to see on a holiday to Iceland.

One of the key sites is the Blue Lagoon, which has a geothermal spa and an outdoor lagoon which has reputedly excellent health benefits. There is also a wonderful waterfall named Dynjandi, ice caves and snow mobile tours.

There are massive glaciers in Vatnajökull and Snæfellsjökull national parks, which are protected.

Reykjavík has lots of interesting places to visit, ncluding museums and a striking concrete Hallgrimskirkja church with a rotating Perlan glass dome, which offers sweeping views of the sea and nearby hills.

Iceland has an amazing greenhouse system which is heated by steam from geysers that help produce fruit and vegetables for local consumption.

It also has a wonderful bird life with magnificent cliffs, home to a variety of birds, especially puffins.

The club meets at Badgemore Park on Wednesdays at 7pm and welcomes new members. For more information, call 07769 687326.

• Entries are now open for this year’s Henley half marathon and Henley Standard 10km, which will take place on Sunday, October 13. The event is being organised by the club and Henley Rotary Club. To enter, visit www.henleyhalfmarathon.org