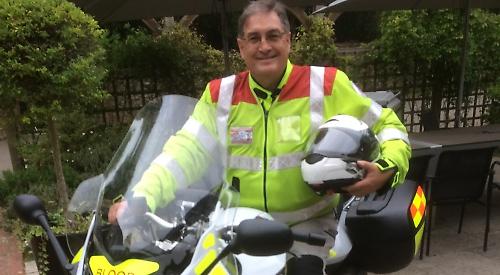 A MOTORCYCLE named Mary and her rider in his hi-vis uniform visited Henley to promote the work of the volunteers who offer their services to Blood Bikes, a rapid response charity that transports blood products between hospitals by motorcycle.

Guy Lipscomb, operations manager for the local group, known as SERV–OBN, gave a most instructive talk to members and guests of the club at their Wednesday evening meeting.

He also showed a series of pictures and videos explaining the work of this life-saving enterprise.

The charity was formed almost 60 years ago and now serves most of the UK and Ireland. The vision of a coast-to-coast service is in sight.

A fleet of Yamaha FJR 1300s and two BMW F800GTs serve the local SERV-OBN and when there is a large consignment or the weather is poor, their four- wheeled vehicles come into play.

The volunteer riders are an unseen and generally unsung emergency service since their work takes place after hours and at weekends. The charity claims to save the NHS about £4million in transport every year.

Its costs are supported by fund-raising from the public and from service organisations such as Rotary.