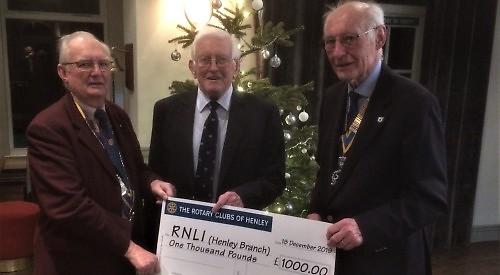 THE Rotary Club of Henley Bridge held its annual Christmas dinner with carols at Badgemore Park, the venue for the club’s weekly meetings, writes Annie Lathaen.

Members enjoyed a traditional dinner of turkey with all of the trimmings followed by mince pies and coffee.

A cheque for £1,000 was presented to Tony Hobbs who accepted it on behalf of the Royal National Lifeboat Institution. The money was raised at the annual Henley half marathon and 10km held in October, which was organised by the club and Henley Rotary Club.

The Henley Carol Singers gave their usual wonderful performance, singing carols old and new and encouraging audience members to join in with the more well-known tunes.

The dinner raised £350 for See Saw, which was the carol singers’ chosen charity.

Anne-Marie MacMillan one of the charity’s fundraisers, gave a short talk about See Saw, which was set up in 2000 and provides grief support for children and young people in Oxfordshire. The service is now available to schools where a pupil has died.