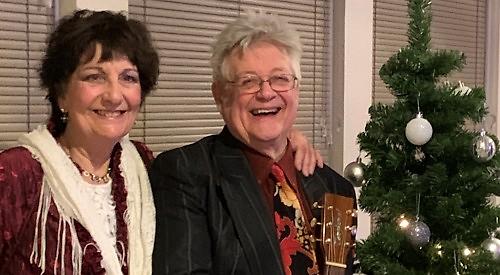 THE Rotary Club of Henley Bridge was delighted to welcome John Dunsterville to its November meeting.

John is assistant district governor with responsibility for the Rotary clubs in the Thames Valley area.

He not only has a long history with Rotary but is an accomplished musician who has worked in the music industry for more than 50 years.

John, also known as Dusty, told anecdotes about his life in the industry, the famous people he has met, the tours he has been on and the amazing life he has led.

A guitarist, he has been a session musician and played on radio and TV, at festivals and venues including Wembley and Madison Square Garden in New York.

John started out playing with his brother in a band which eventually became Rainbow Ffolly, a psychedelic pop group, in the Sixties.

The group released an album called Sallies Fforth in 1968 for which John designed the sleeve.

John is still playing and made some recordings last year which included some new songs he wrote.

He runs a successful blues club near High Wycombe which has an array of interesting acts.

John’s wife Jane attended the dinner to provide some accompaniment to John.

This was a very interesting talk with music spanning the last 50 years and John received a great round of applause.