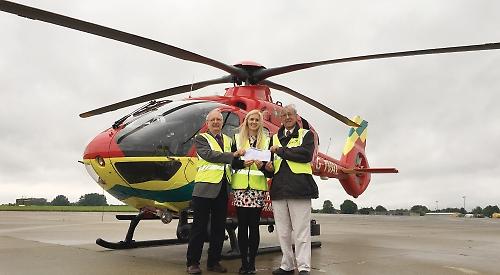 REPRESENTATIVES of the club visited RAF Benson to present a cheque for £1,000 to the Thames Valley Air Ambulance.

Supporter fund-raising manager Sarah Sharkey explained how such donations have enabled the service to expand.

The emphasis is now on “taking the hospital to the patient or casualty”. This means that when the experienced doctor and support team arrive at the scene the patient receives the level of medical care which he or she would receive at an accident and emergency department.

The doctor will frequently accompany the patient to the hospital in a land ambulance, so continuing treatment through to arrival at hospital.

This had been made possible by the purchase of a new helicopter with the latest life support equipment, including a compact chest compressor and an ultrasound device, as well as blood supplies. The ambulance also flies at night now.

The level of calls upon the service has resulted in the acquisition of two emergency response vehicles which can either attend to supplement the air ambulance service or can attend emergencies when the helicopter cannot be deployed.

Ms Sharkey said: “We are deeply grateful for this donation. The club has been a log-standing supporter of the charity and it is because of this loyalty to our cause that we are able to be as ambitious as we are.”

At the club’s twilight meeting last week, the club welcomed a well-known local face, Colin Allum, to talk about “A lifetime in scouting”.

His late business partner Lawrie Scott-Watson had been a founder member of the club and president in 1964.

Mr Allum joined the 1st Henley scouts when he was 10 years old and the group scoutmaster was Phil Sutton, who had helped launch the group in 1908, one of the first in the country.

He gave a comprehensive account of how Robert Baden Powell, a British army officer instrumental in defending Mafeking during the Boer War, had written various pamphlets entitled Scouting for Boys.

Mr Allum recalled how Mr Sutton had obtained the use of a campsite in Eastbourne, which the group visited regularly for many years.

During his first year in 1956 he had visited the World
Jamboree.

He then explained how he had progressed through the various stages, such as beaver scout, cub scout, explorer scout and network (adult) scout, gaining various proficiency badges on the way and eventually becoming troop leader.

At that time, the headquarters were in a small dilapidated hut near the old football ground in Reading Road but a new building was erected in Greys Road which is still in use.

When he moved to Stoke Row, he became a group leader there.

Mr Allum’s talk demonstrated his enthusiasm and love for the scouting movement, which now has a membership of 465,000 across the UK.

He said it was continually evolving but keeping to its principles.

The vote of thanks was given by Denis Craggs, who recalled camping in a wet Lake District on a number of occasions.