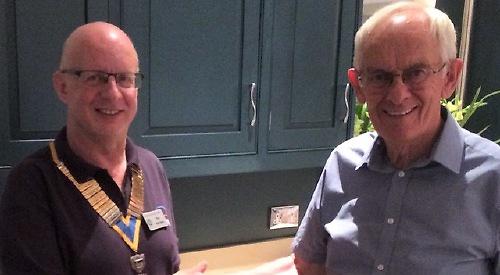 There were three parts to the competition: target putting, uphill and downhill and crazy golf with bunkers, trees and water.

Jon Connell, managing director of the golf club, kindly arranged the event and ensured that staff were on hand to coach the teams through the secrets of good golf!

Lee gave a magnificent demonstration of hitting golf balls into an open umbrella and sending others up over the trees.

Our competition was very close with the Rotary Club of Henley Bridge winning by a narrow margin.

The event raised £200, which will be divided equally between the two golf club captains’ charities for their years in office. These are Prostate Cancer UK, the choice of men’s captain David Weston, and Medical Detection Dogs, the choice of ladies’ captain, Carol Searle.

The Rotary Club of Henley Bridge used the occasion to induct a new member, Roger Dyer. He was previously a member in the Eighties and Nineties and was club president in 1992/3 before moving away. Roger has returned to Henley to be close to his family and has rejoined the club so he can catch up with old friends and make new ones.

The club is now working towards its next event, the Henley half marathon and Henley Standard 10km on Sunday, October 21. For more information about the races, visit www.henleyhalf
marathon.org