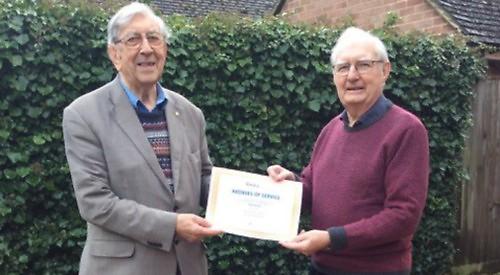 A HENLEY man has received no fewer than four awards from humanitarian group Rotary International for “going the extra mile” in community service with his local club.

At an online meeting with colleagues from Henley Rotary Club, he described the awards as “astounding” and accepted them on behalf of the entire local membership.

Twice a president of the club, John has been particularly active in the club’s youth activities, notably Youth Speaks, a programme that encourages the young to get into public speaking.

Tapping into local philanthropists, John regularly raises around £5,000 a year for the various projects.

He is also an active organiser of many other club projects, including its annual jazz night, a major fundraising event for the club’s works. John was nominated for Rotary International’s “Avenues of Service Awards” by Barry Prior, the club’s president in 2019/20.

Barry says he entered John in all the categories, expecting the award committee to pick the most relevant one.

“I was over the moon to receive notification that he had been selected for awards in every category,” he said.

Rotary has around 1.2 million members worldwide, volunteering in more than 35,000 clubs to give back something to the community locally and globally.