Schoolgirls give sculling a go with help from former pupil 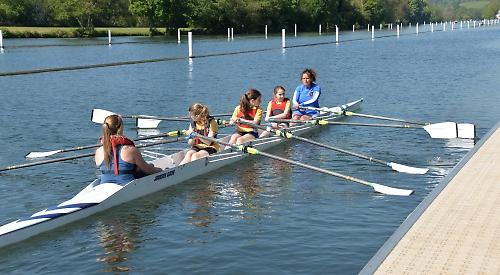 PUPILS at Rupert House School in Henley were given a taster session in sculling.

Twelve year six girls spent an afternoon at Upper Thames Rowing Club, where they learnt the basics of sculling before going out on the River Thames.

They were taught by Emily Forrester, a junior coach at the club who is a former pupil of the independent school in Bell Street. She had visited the school the previous day to give the children a talk about sculling.

Miss Forrester was helped with the coaching by volunteers from the club, including chairman John Pilgrim Morris.

The girls were given a tour of the clubhouse and had a session on rowing machines before taking to the water in a coxed quad or double, each accompanied by a sculler from the club or school. Deputy headteacher Sarah Williams said: “The girls had a gorgeous afternoon on what was a beautiful spring day and many parents came and supported them.

“They all wore buoyancy aids which gave them extra confidence, although thankfully these weren’t needed. The girls had a fantastic time and we are all looking forward to our second session.”

Miss Forrester said she wanted to link up with her old school in order to get the pupils interested in rowing while they were young.

“I started rowing when I was in year seven and it’s a really great way to grow,” she said.

“The girls were really good because it’s a tricky sport. Some took to it better than others but they all gave it a go and were really keen.”