American with special reason to like traditionally English sporting event 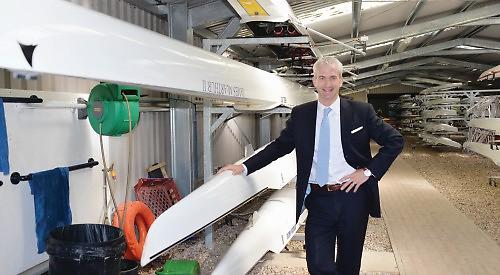 JESSE ELZINGA has a special affection for Henley Royal Regatta.

Not only did he compete there twice, but it was also where he first met his future wife.

Now the American is headmaster of Reading Blue Coat School in Sonning, a few miles upstream from Henley.

Mr Elzinga, a Harvard University graduate, raced at the regatta in 2001 and 2002 and for years afterwards would always come back to catch up with friends from the rowing community.

He could often be found in the stewards’ enclosure wearing the crimson blazer of his alma mater and it was here that he was introduced to Elaina Berry in 2009.

“We were introduced by a rowing friend at the Fawley bar,” recalls Mr Elzinga, who is also an Oxford University graduate.

“He said Elaina was a successful banker and how we would like each other because we were both ambitious. We didn’t seem to have very much in common. I asked who she was cheering for and she said. ‘Cambridge’. I thought this was a joke.

“I was going to leave it there because I wasn’t looking for a girlfriend. Then she sent me an email saying she was thinking about going back to school and wanted to pick my brains about Harvard.

“We went for dinner and it was my last first date.”

Mr Elzinga grew up in small town south of Detroit with his two sisters. His father Steve and mother Nancy ran a fruit orchard near Lake Erie.

“My first job was selling the apples at Detroit farmers’ market, which I did from when I was five,” he says. “At heart I’m a small town boy.”

Mr Elzinga attended Bedford High School in Massachusetts. He was a talented middle distance runner, who competed at state level and was considered good enough to reach national level. However, he lost his entire senior season in 1997 due to injury.

He says: “In my final year I watched someone win the state final who I had beaten the year before — it was really frustrating.

“However, for no particular reason I did really well academically. In my last four years of school I had perfect attendance, so when it came round to university my father said, ‘why don’t you apply for Harvard?’ I had applied to other local universities but in the end I got in.”

Twenty years later, he is still the only graduate of his school to attend Harvard.

When he arrived at the university, where he studied religion, Mr Elzinga signed up to be part of the track running and cross-country teams.

But injury struck again when he suffered a stress fracture in his left shin. The doctor who treated him was a rower and recommended he took up the sport as an alternative.

Mr Elzinga recalls: “He said, ‘I can see you’re an amazing athlete but this injury is really problematic’. We talked about doing cycling or swimming as well and we went down to the boathouse.” He was put under the tutelage of coach Charley Butt, who was instantly impressed by the newcomer’s performance on the ergo.

Mr Elzinga says: “He crouched down next to me and said, ‘I’m not sure where you’ve come from but you’re the type of guy who could be a success’. I was always quite strong on the ergo.”

Less than 18 months later Mr Elzinga became a national champion as part of Harvard’s lightweight eight but claims it was as much to do with luck as his talent.

He says: “Anyone can go into Harvard and learn to row. You go, sign up and they will teach you because they have so many different boats.

“It isn’t like Oxford where you have colleges and then there are trials. The whole university club at Harvard helps people to learn. It’s inclusive and it let someone like me go and learn.

“The coaches gave me a lot of attention and it was a very positive experience. I was very keen and knew what hard work was about so I spent a lot of time rowing in the tank.”

At the following year’s championships, the crew lost to Yale, who went on the win the Temple Cup at Henley Royal Regatta.

The tables were turned a year later when he was captain of the crew.

Mr Elzinga says: “We lost every race to Yale until the national championships. It was wonderful for me as captain, especially having lost to them the year before. It was special.”

This victory meant the eight went to Henley.

“Harvard will only send crews if they win the Eastern Sprints or national championships,” explains Mr Elzinga. “You have to win or you don’t go.

“It’s paid for by Harvard old boys as congratulations for winning. I had never been to England and had just got my degree with honours. We kept the training up for eight more weeks before flying over.”

The event is revered at his old university.

“It’s legendary,” he says. “In the boathouse at Harvard there are pictures of the event going back to the 19th century. There is also a big newspaper cutting with the headline ‘Harvard wins the Grand’.

“We walked past those photographs and you realised how good you had to be to go.”

That year the Harvard eight raced in the Temple Cup only to lose to Oxford Brookes University on the Friday.

“We were the B crew to our freshmen heavyweights who later beat Oxford,” says Mr Elzinga.

“The Oxford crew said we did the regatta well because we got to enjoy the social side on the Friday and Saturday, then we got to watch our team-mates win against them on Sunday.

“We took all the credit, saying we pushed them so hard on the Friday that it was a benefit to our other crew.”

Rob Edmondson, who was a member of that Oxford Brookes crew, is now head of rowing at Reading Blue Coat School.

Later in 2001, Mr Elzinga went to Oxford University, where he completed a masters’ degree in religion, as a Rotary Foundation scholar.

He also joined the university’s boat club, determined to compete with the heavyweight rowers, some of whom weighed 30kg more than him.

He won the British indoor rowing championships in a record time for a lightweight but then injury struck again.

“I was doing a weights circuit early in the morning,” he says. “I am 6ft and weigh 75kg and I was doing the same weights as 6ft 6in guys weighing 110kg when I strained something in my right side.”

As a result, he missed final selection for the Boat Race.

Later in 2002 he raced at Henley Royal Regatta for the second and final time.

He competed in a coxed four in the Prince Albert Challenge Cup but was knocked out on the Friday.

However, he says: “It was great experience having missed the Boat Race and it was great to race with members of the squad again.”

After graduating from Oxford, Mr Elzinga was approached by coaches from US Rowing about becoming part of the squad for the Athens Olympics in 2004.

But he declined the offer in favour of his career.

“It was tough but I decided to give up rowing. There were only six seats in the lightweight squad, a four and a double.

“One of the guys from my Harvard crew, Pat Todd, made it and he was a better rower then me. I had got to the highest level I was going to reach.” Instead, Mr Elzinga became a theology and philosophy teacher at Whitgift School in Croydon. The independent school is known for its sporting heritage, particularly in rugby and cricket, and Mr Elzinga started a rowing club.

“We raced at Teddington and made all sorts of developments in my four years there with the club,” he says.

In 2006 he moved to St Edward’s School in Oxford, where he was made head of religious studies, and three years later was promoted to director of
studies. aged just 30.

“I was one of the youngest deputy heads in the country,” he says. “The teaching was going pretty well and I had no ambition to leave but then I met Elaina, who was working and living in London.

“I found myself driving to meet her and we kept that up for about a year-and-a-half.” Then he was asked by the director of studies at Harrow School if he was interested in taking over from him as he was retiring.

“I told him that part of the reason I would be interested was I had a relationship with a girl in London,” says Mr Elzinga.

“Even so I found it very hard leaving Oxford. I cried when I moved away.”

He remained at Harrow until September 2016 when he joined Blue Coat after being headhunted for the headmaster’s job.

He says: “When the opportunity came up to be a head at a rowing school on the Thames, nicely situated between Oxford and London, next to Henley, I wanted it.”

Mr Elzinga and his wife were married in Maine in July 2013 and now have two daughters, Isabel, three, and Saskia, one. Saskia’s godmother is Eeke Triggs Hodge, the wife of three-time Olympic rowing champion Andrew.

Mr Elzinga, who is godfather to their son Sebastian, met the British rower while at Oxford.

Mrs Elzinga is as an investment manager for the Wellcome Trust, a charity which manages more than £20 billion in assets, with all profits going towards medical research.

The couple are happy in this area. “It’s such a nice place to live with a young family,” says Mr Elzinga. “We have links with the church and local primary school where I am a governor.”

He inherited an independent, co-educational school in good shape thanks to former headmaster Mike Windsor, who is now in charge at Abingdon School.

Mr Elzinga says: “Most headmasters take over after a failed inspection or falling application numbers but this has been the opposite.

“My predecessor moved on to a bigger school but he did great things here and the school is in fantastic shape. The results are the best they’ve ever been.”

In his office are photographs of his family, a book on the history of rowing blazers and more pictures of his 2001 Henley Royal Regatta crew.

He attended this year’s event on Wednesday to cheer on Blue Coat’s first eight in the Princess Elizabeth Challenge Cup but unfortunately they were eliminated.

Mr Elzinga says: “The regatta is amazing and one of the most wonderful rowing events in the world. For Americans coming over here it’s a dream.

“And it’s always special for me because it’s where I met my wife.”