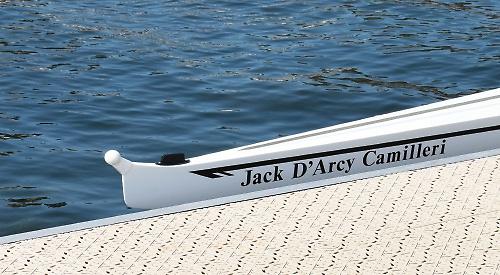 TEAM-MATES of a former pupil at the Oratory School who was killed in a road accident say they “did him proud” after competing at the regatta in a boat named after him.

Jack D’Arcy Camilleri, 20, of Mill Road, Caversham, died in hospital two days after crashing on a Honda motor scooter in Canggu, a village in Bali where he and a friend were staying in August last year.

Mr Camilleri, who was captain of boats at the independent boys’ school in Woodcote, had dreamt of racing at the regatta but never made it.

After the school’s eight qualified for the Princess Elizabeth Challenge Cup this year, they decided to make his dream come true by racing in a new boat named after him.

Mr Camilleri’s friends and family raised £20,000 for the boat, which had its first outing last month. In a message ahead of the race, the school said: “It was Jack’s greatest wish to race at Henley and that wish will now be fulfilled as he becomes the 10th man helping our boys speed up the course through the new school boat named after him.

The Oratory boys were knocked out in the opening round by Westminster School, who won by three-and-three-quarter lengths, but were proud of their efforts.

Josh Bisdee, 18, from Checkendon, said: “When we were going out to race you could see a whole lot of people who were really up for it, which was a massive help. We did Jack proud.”

Mr Camilleri rowed for Upper Thames RC in his gap year and went on to study at Oxford Brookes University, where he continued to row.