Daughter inspired me to pass on love of outdoors 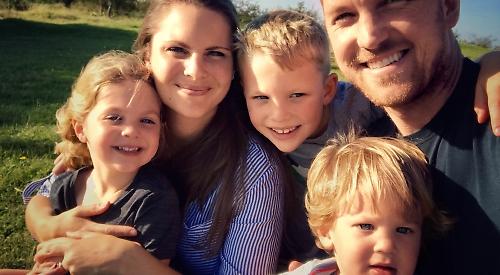 ALEX GREGORY likes nothing more than being outdoors.

And since he’s retired from rowing, the double Olympic champion is determined to inspire others with his love of nature and the natural world.

Gregory, 34, has penned his first book Dadventures, which is full of fun activities to do with youngsters ranging from 30 minutes to overnight trips and for a few hours after school.

One of the things he enjoys most is taking his three children out on the river at South Stoke in his inflatable kayak.

This, he says, gives Jasper, eight, Daisy, four, and Jesse, two, a chance to breathe in the world around them.

Gregory knew he had to change their habits when, a few years ago, his daughter woke him up at 4.30am wanting to watch children’s television show Peppa Pig on his phone.

“I knew we had a problem,” he says. “Daisy had become reliant and addicted to the screen, it was a wake-up call.

“I’m not advocating total removal of screens, as our children need to be able to navigate this connected world but I think they also need to continue to be in touch with the natural world as that is the first thing that will be lost.”

Gregory says there needs to be a balance between the two. When he is out with his children they will often note types of animals or trees then go home and research them.

“If we spend 30 minutes outside I don’t mind if the children want to watch some TV when we get back,” he says.

Gregory became even more determined to do more with his children after he feared for his life when taking part in a rowing expedition last summer.

He was part of a six-man crew attempting to row from Svalbard in Norway to Iceland, hoping to set 12 world records along the way.

But they were forced to stop on the tiny volcanic island of Jan Mayen, about 370 miles short of their final destination, due to the treacherous conditions. The crew were stranded twfor o weeks on the island before being rescued by the Norwegian coastguard.

Gregory had written a note to his family on his phone while he was at sea because he feared he may not see them again.

He recalls: “We were floating somewhere in the Arctic ocean in the middle of a storm, many days away from anywhere in any direction and faced certain death if our tiny boat were to capsize.

“I wrote a last message to my family on my phone just in case we didn’t make it. I didn’t send it, but hoped that they would discover the words when the boat was salvaged one day by a passing vessel or found washed up ashore.

“I realised then that my kids didn’t care if I was being a brave Arctic explorer doing something that no one had ever done before.

“All they cared about was time at home with me, having a bike ride, camping in the garden or cooking marshmallows over the fire. The most precious thing we have is time, and with young children that beautiful time is finite.”

Gregory wrote the book over the winter while balancing his working commitments as a motivational speaker and as a consultant for British Rowing, where he worked to support athletes in achieving their goals.

He found that Daisy’s 3ft by 3ft Wendy house in the garden of his home, then in Ipsden, was the best place for a bit of peace but did not provide a lot of space for a man who is almost 6ft 6in.

“Everything I have written about is what we do together as a family or what I have done in the past,” he says. “Memories from my childhood are interspersed throughout and getting the opportunity to involve my children who have done the illustrations has been wonderful.”

Gregory lives with his children, partner Emily Airey, two dogs, Roo and Tiggy, and a tortoise called Stanley in Nettlebed and they try to make the most of the area around them.

“There are endless places to visit and sights to see,” he says. “Our favourite things to do involve getting out into the countryside and spending time together whether that’s a quick trip after school or a whole day and night at the weekend.

“It’s only a short drive into the Chiltern Hills so something we do often is head out over one of the many footpaths that web across the landscape and immerse ourselves in the surroundings.”

Despite retiring from rowing after the Olympics in 2016, Gregory can still be found travelling on the river. He last competed at Henley Royal Regatta in 2015, winning the Grand Challenge Cup as part of the Great Britain men’s eight.

Now you will find him travelling at a much more leisurely pace. Gregory says: “The Thames has always been my place of work from my rowing days, but now it is our playground. In the summer I love to take the kids for a wild swim after school in the river to cool off. In the winter we spend a lot of time in our blow-up kayak that gives us all a different perspective on life and a real adventure.

“You see things in a different way from the water level, something I learnt from my life on water and something I’d really encourage people to do.”

The book was released last month and is selling well. He has done book signings in London, at the royal regatta and is set to appear at the Henley Literary Festival in October. He has also been booked to appear at Countryfile Live and the Wilderness Festival.

“My only guide has been what people are telling me and they seem to be enjoying it,” he says. “I am so passionate about getting young people and adults outside and enjoying the outdoors together. It helps everyone mentally and physically whether it’s five minutes or two hours. It’s a good bonding experience.”

Even if people aren’t able to get outdoors for a full “Dadventure” Gregory thinks people should just enjoy what is going on around them. He believes it helps instill an awareness in youngsters so they grow up wanting to stop global problems like plastic pollution.

“My parents and grandparents always tried to get me to notice things,” he says. “We would go on a walk and they would always point things out to me — whether it was a weed in the pavement, or a woodlouse on a wall or the birds, clouds and trees.

“It made me aware of things and because I was I had an interest in our environment. It made me care about it and want to look after it. I want to encourage parents and guardians to look at things and point them out to their children.”

He added: “If we get the younger generation noticing things then they will care about them. It will help when it comes to stopping littering and getting plastic out of our waters.”

• Dadventures: Amazing Outdoor Adventures for Daring Dads and Fearless Kids is published by HarperCollins and costs £12.99.