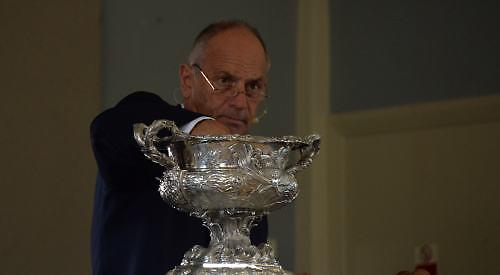 Competitors from as far as America, Australia and New Zealand were among those anxious to discover who they would be facing.

The Queen Elizabeth room was so full that rowers queued outside on the hottest day of the year so far.

This year’s regatta, which started on Wednesday, has a record 660 crew entries, almost 100 more than the previous highest total a year ago, with about 1,900 athletes and 159 overseas crews representing 17 nations.

Regatta chairman Sir Steve Redgrave drew the names from the Grand Challenge Cup for each of the 24 events. The selected crews in each event were drawn first in order to keep them apart. This year’s event features mixed military crews in the King’s Cup, which commemorates the centenary of the 1919 Royal Henley Peace Regatta.

Crews from the original Allied nations of Australia, Canada, France, New Zealand, the UK and the USA will be joined by Germany and the Netherlands to compete in a knock-out format over the final three days.