How rowing helped heal wounds of the Great War 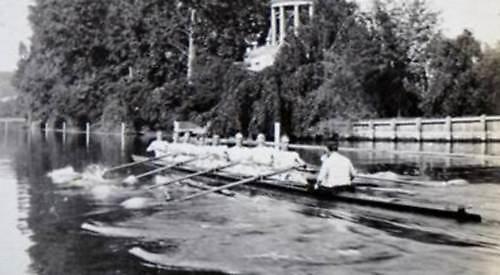 MIXED military eights will compete at this year’s Henley Royal Regatta to commemorate the centenary of the Peace Regatta.

The event 100 years ago was staged to help heal the wounds and hasten the return to normality for the Allied nations after the Great War.

The highlight was the King’s Cup, which was presented by George V for Allied military crews. Six nations competed with the Australian army winning the final.

This week, the new King’s Cup will involve crews from the original six competing nations, Australia, Canada, France, New Zealand, the UK and the USA, who will be joined by Germany and the
Netherlands.

They will compete in a knock-out format over the final three days of the regatta.

It will be the first time that men and women have rowed in the same boat at an elite event.

It was a Daily Telegraph special correspondent who observed in January 1919 that there were many soldier rowers from Australia, New Zealand and Canada still in this country after the war who would be keen to have the opportunity to compete at a Henley regatta before returning home.

A meeting was convened by Leander Club on January 22 to discuss the revival of English rowing after the war.

Officials from the leading clubs associated with the Amateur Rowing Association were present, along with the secretaries of those regattas conducted under the association’s rules.

It was also decided to ask the regatta committee to include a race for service eights from “His Majesty’s forces and the Allies”.

The annual meeting of the stewards of the regatta acted upon the resolution and decided to organise the interim regatta, although the trophies from the royal regatta would not be available.

Prominent supporters of British rowing were among those elected to the regatta’s committee of management, including Lord Desborough, Viscount Hambleden, Lord Ampthill, Frederick I Pitman, Lt Col William Fletcher and Col Harcourt Gold.

Lt Col Fletcher, who had been gassed during the war, was named chairman but within a month he died of bronco-pneumonia, a victim of the influenza pandemic. Mr Pitman succeeded him as chairman.

At a meeting on February 26, the dates of the regatta were set as Friday and Saturday, July 4 and 5. If the number of entries was large, preliminary heats would take place on Thursday, July 3.

At a meeting of the committee on March 18, it was announced that the King would present a trophy for the eight-oar race and it was anticipated that this gesture would add interest to the regatta.

The rule for qualification for the race was then drafted as follows: “The race shall be open to any crew of amateur oarsmen who, previous to November 11, 1918, served in the navy, army or air force of any country which fought for the Allied cause. All the members of a crew must have served in the forces of the country which that crew represents. For the purpose of this qualification, a ‘country’ shall be taken to mean any nation, dominion colony or protectorate which raised its own expeditionary force or its equivalent.”

It was then announced that Australia, New Zealand and Canada had indicated their intentions to enter the race and it was hoped that the USA, France and Belgium would do likewise.

It was expected that Great Britain would provide a “representative crew”.

The amateur rules for qualification for all the races at the Peace Regatta were set at a meeting of the stewards of the royal regatta on April 10. Several other changes needed to be made in the general rules of the regatta to meet the special circumstances for that year.

The committee of Leander Club invited Arthur Wiggins, president of Oxford University Boat Club in 1914 and latterly of the Grenadier Guards, to form a crew of “old university and public school rowers” with a view to representing Great Britain in the King’s Cup.

Meanwhile, the Australians, Canadians and Kiwis were already in training for the event at Putney. Indeed, six weeks before the start of the Peace Regatta, the Times was able to appraise the preparedness of the crews entered for the King’s Cup.

On May 31, the donors of the trophies for all events at the regatta were announced together with the closing date for entries — June 21.

As had been feared, Leander was unable to put a crew together in time for the King’s Cup.

However, the club was able to enter a boat in the Allied forces fours race for which the winner’s trophy was the Leander Cup, which was presented by the club.

This crew of S E Swann (bow),
R S Shove (2), E R Burgess (3) and A F R Wiggins (stroke) came out of the eight that had been training for the King’s Cup and was also entered in the Wargrave Manor Cup for senior (English) fours.

When entries for the regatta closed, there were so many that the racing had to start on Wednesday, July 2.

The Australian rowing section headquarters was at Wharfe House in Henley and housed two eights and three “emergencies” and support staff. They stored their equipment in a shed in the grounds and the rowers built another shed to store their boats.

The draw for the regatta was made at Henley town hall, as it still is today, on Saturday, June 28.

That day, crews competing at the regatta were going through preparations in front of a large crowd of spectators watching from the towpath. Among the crowd were groups of old rowers who hadn’t seen each other since before the war.

The first day of the regatta was cold and dull with a wind favouring the Bucks station. With only heats scheduled, the crowd for the pre-luncheon session was small but it grew after the interval.

One heat was rowed in the Leander Cup with the United States army beating the Coldstream Guards, crewed largely by Old
Etonians.

There were 26 races on the following day, including the first heat of the King’s Cup, which was between the two Australian crews.

The United States Army comfortably defeated the under-equipped French Army by more than three lengths but, paddling to the start, the French received the best ovation of the day from the crowd.

In the Leander Cup heats, the Leander four defeated the United States army in a time of eight minutes and 12 seconds after leading all the way.

Within a minute of the final heat between Australia and New Zealand, Australia committed a foul by Temple Island which stopped the race.

On finals day, the weather was again overcast with the threat of rain.

As each of the trains arriving at Henley station released their passengers, there was plenty of khaki on show — unlike the colourful blazers seen today.

Other spectators came by bus, including a group of wounded and limbless soldiers from the Australian Auxiliary Hospital in Dartford.

At the river, Australian soldiers, or “diggers”, were prominent in all the good vantage points — on the bank, along the towpath, in the stands, including one built on the lawn of Wharfe House, in the trees and any other place that afforded an excellent view of the course, in particular the finish.

The final of the King’s Cup was between the First Australian Imperial Force on the Berks Station and Oxford University on the Bucks station.

When paddling up to the start of the race, the Australians were sent on their way with rousing cheers, innumerable “coo-ees” and a band playing “Australia will be there”.

It was said that some of the antics on show bordered on raucous.

The time to Fawley was three minutes and 25 seconds.

At Remenham Club, the Oxford crew increased their rate but the Australians were undeterred and cruised home by a length in a time of seven minutes and seven seconds.

Australian stroke Clive Disher said that the crew “nearly went mad” after their win and the stand on the Wharfe House lawns was the scene of a “wild demonstration” when the boat crossed the finish line.

In the stands, limbless men had been hoisted on to nearby shoulders to get a better view of the victory.

On the landing stage, up to 100 soldiers of all ranks awaited the crew, eager to help with lifting the boat out of the river and take it back to the shed.

In the pouring rain, Disher received the gold King’s Cup from Princess Arthur of Connaught and each member of the crew received a winner’s medal.

According to a letter written by Disher later, Sir Talbot Hobbs, the Australian Corps Commander, almost cried down his neck and barely had the voice to tell him he was “the happiest man this side of the world”.

In other events, Leander won the Leander Cup by ???-and-and-a-half lengths from the United States army crew and they followed this up with victory in the Wargrave Manor Cup.

The post-race celebrations on the evening of July 5 at the Australian boat shed were joyous.

The King’s Cup was filled with champagne as it was thought that the King might not have approved of the use of beer.

Crew member Albert Smedley said the champagne came from the Henley publican who ran the crew’s “local” and had promised it if Australia won the cup.

Tom McGill recalled that he arrived at the shed with a case and each member of the crew was given a bottle, with the remainder emptied into the cup.

But Fred House thought it had been provided by the Australian Imperial Force.

Following the victory, the Australian War Memorial fought for two years to keep the cup in a museum.

The Victorian Rowing Association petitioned the King to express his intention for the cup and, at his command, it became the perennial trophy to be presented to the winning state representative men’s eight at the annual Australian Rowing Championships.

Crews at this year’s Henley Royal Regatta will be competing for a newly commissioned King’s Cup.

• This is an abridged extract from Pulling Through by Bruce Coe, which is available from the royal regatta shop (£25).