I was fat until I took up rowing, now I’m in the GB squad 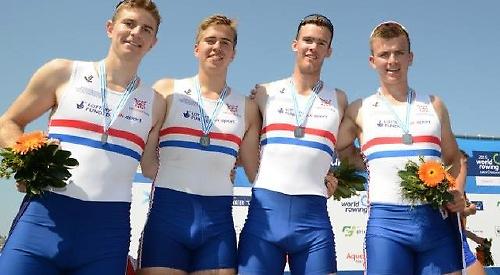 WHEN he was growing up, Thomas Digby was, in his words, “big and fat” and not athletic at all.

All that changed at age 13 when he went to secondary school and was introduced to rowing.

Now 6ft 5in tall and weighing 15st 7lb, he is a member of the GB under-23s squad and a triple national champion in America, where he is at Yale University.

He has returned to his home town of Henley, where he used to go for family picnics on the riverbank as a child, to compete at the royal regatta for the sixth time.

And he is hoping to go one better than last year when he was part of the men’s under-23 four that lost in the final of the Stewards’ Challenge Cup.

Digby, 20, from Greys Green, is the elder son of Nick, a gardener, and Julie, who works in human resources. He attended Moulsford Preparatory School and then Abingdon School, where was obliged to take up a sport.

The independent school has a rowing pedigree, so before he started he went on a rowing course at Upper Thames Rowing Club in Henley.

He says: “I was so unathletic growing up — I was big and fat but strong. I did the course because rowing was something I had to try and having done it I got a head start on some of my peers.”

When he started at Abingdon, students were given a 500m ergo test and Digby came third in his year. He realised he had potential and his rowing career has blossomed ever since.

Digby says: “My personality is such that when I become passionate about something I try to be the best that I can.

“I invested in a rowing machine in the shed, then some weights so that when I came home from Abingdon at night I could train. Seeing the results I was getting from training, I was doing more and more.

“In my first year I was training once during the day and once at home. I had weighed 90kg (14st 2oz) but had lost 5kg and put on all this muscle. It was quite transformative.”

The year before he joined Abingdon, the school had won at Henley and this made Digby keen to try to repeat this feat.

He says: “I have never not been to the royal regatta — we used to have picnics there — and I really wanted to race there.

“I was stronger than all these guys who had won there and I was really enjoying racing as J14/15 and I was getting better.”

It was in his J16 year that he really shone under the guidance of coach Dave Currie, a former lightweight rower who now coaches at Shiplake College. Digby says: “My way of getting his attention was to show I was fit enough. Usually those in J16 don’t get into the top boats but I wanted to show I was ready.

“There was a 5km ergo test and I came top in the whole school and that was when it began to take off for me. I was 15 yet I was beating the first eight guys who, the year before, had won the Princess Elizabeth Cup.”

Digby won his place in the Abingdon boat and the school won the 2014 National Schools Regatta against Eton. It was his first win and, he says, one of the biggest moments of his life. It was quite cool being in the eight with the other guys and it was the first time I got the feeling of winning,” he says.

Eton gained their revenge at that year’s royal regatta, winning by just three-quarters-of-a-length.

Digby says this was “devastating” but admits: “I didn’t really know how to deal with the pressure at that age.”

Three days later, he attended the Great Britain team trials for the junior world championships in Hamburg in August and was selected for the top boat, the coxed four.

Digby recalls: “When I went to the trials the best Eton guy was there and I wanted to beat him so much and get revenge. I was an unknown but I won the five seat races and kept winning and ended up competing in the junior worlds. There have been only five of us in the last 10 years who have done that.”

The coxed four won silver, which he says was “absolutely awesome”. In November that year, he attended the first long distance trial for the GB junior rowing team, where he and his school friend Adam Teece were the fastest over 5km.

In February 2015 he competed at the British Indoor Rowing Championships at the London 2012 Olympic velodrome in East London, where he won gold in the 2,000 race and became the national champion in the sixth-form event.

He also set six under-19 world records on the ergo from 5km to marathon distance.

At the next long-distance trial, he and Teece were again the top-ranked pair and were selected for the Munich International Regatta, where they won bronze in the GB eight.

At that year’s National Schools Regatta, the friends won silver in the pairs event, losing out to St Paul’s School, who also beat them in the Princess Elizabeth Cup on the first day of the royal regatta later in the year.

Despite this, Digby was then selected to represent Great Britain at the Junior World Championships in Rio in August.

In February 2016 he and Teece were again the top pair at the GB junior trials in Boston.

As a result, they both competed at the Munich Junior International Regatta, where Digby was placed ninth in the double sculls and fourth in the quadruple sculls.

He competed at the royal regatta in a quadruple scull that lost a close quarter-final in the Fawley Challenge Cup to Claires Court, who went on to win the event.

After completing his studies at Abingdon, Digby went to Yale, where his friend Charlie Elwes was already studying and recommended the move across the Atlantic.

It was a good decision.

Digby says: “What Yale gives me is the balance between a social life and rowing and an academic life.

“The rowing it offers is high-class and I think it is higher than what’s on offer in the UK.

“Steve Gladstone, my coach, has won the most national championships of any coach and he been coaching for 55-plus years. He knows his stuff and was a big draw. He coaches us to have long strokes so our rate is lower but much more powerful when we race. I loved my time in the UK but my main thought was to get an education that would open some doors and take my rowing to the highest level.

“Previously I had felt a lot of pressure as everyone had this idea that I was better than I thought I was. They would talk about how I had made the top boat in my J16 year and said, ‘look at this kid and what he can do’.

“I was able to shrug this off when I came to Yale. Nobody knew who I was and I could have fun.

“There is a super, super competitive environment in the squad and I have really learned how to race. I always used to try really hard but now I enjoy it.”

In his freshman year, he was in the three seat as he helped power Yale to a national championship, an EARC Spring title and an unbeaten dual racing season that included a victory in the Yale-Harvard Regatta. He received first team
All-Ivy honours.

He was also in a composite coxless four that reached the semi-final of the Stewards’ Challenge Cup at Henley and won silver in the GB men’s four at the under-23 World Championships in Bulgaria.

Last year, Digby won the same big three events with Yale and reached the final of the Stewards’ Challenge Cup in the GB under-23 men’s four, losing to the GB men’s four. He also won a silver medal at the world under-23 championships in the GB eight, losing out in the final to the USA by about two seconds.

This year Yale have completed an unblemished season and Digby is now back training with the GB under-23s.

He is part of a composite coxless four competing in the Visitors Challenge Cup at Henley and is racing for Griffen Boat Club, the alumni of Abingdon School.

He then hopes to win a record fourth national title in his final year at university, when he will be captain of the boat club, before joining the senior GB men’s team.

Digby says: “My time at Yale has been fantastic and I really want to win all three big events again in my last year, not just because I am captain but because I don’t want to leave having had a worse year than the other three.

“I will try to go to the 2024 Olympics. For me, that’s the pinnacle. I want to achieve the highest level. There is nothing cooler than being called an Olympian.

“I also want to win Henley. I still haven’t won here and it does bug me. Winning Henley was the reason I got into rowing.

“If I finally win it will be really emotional for me. There is so much pressure here, you have to make yourself detached from the crowd and the occasion and focus on the rowing and doing your best.

“My whole family and friends will be here watching me race and to win would be incredible.”