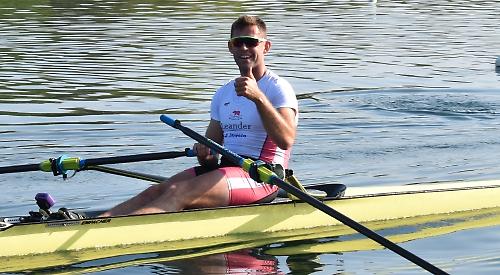 Beaumont, 28, won silver in the men’s quads at this year’s Olympics in the summer.

Earlier in his career Beaumont was part of the quad that finished fifth at the Rio 2016 Olympics.

Beaumont announced his decision on Monday via Twitter where he said: “I’ve some exciting but a little bit scary news.

“I’ve decided that now is the right time for me to move on from international rowing. I’ve really had a great time since 2009 when I first raced for Great Britain against France in the eight, and even then, I thought it would be so unlikely to make it to an Olympic Games.

“I now stand here so proudly with this silver medal from the Tokyo Games, which I still get goosebumps when I think about it. It embodies all the hard work, difficult ergo sessions, injuries, but also so much fun I’ve had with some amazing people.

“I’m very fortunate to have had wonderful teammates, encouraging and fantastic coaches, but also an amazing community in British rowing, my friends and family and the rowing clubs that I’ve come from. This medal belongs to every single one of you, so thank you so much for your help.

“As I move on from international rowing, I’m not leaving the sport. I love rowing very much. I’ve bought a boat that’s big enough for me to grow into in my retirement. You will still see me on the river at Maidenhead Rowing Club, Leander Club and you will see me in some Masters’ racing.

“I’d also like to take this opportunity to thank the National Lottery, British Rowing and Team GB, you’ve been wonderful. But I also want to wish my former teammates and new up and coming rowers the best of luck, I will be supporting you every stroke on your way to Paris 2024. Thank you very much.”