I'm an Olympic champion but can't get a mortgage 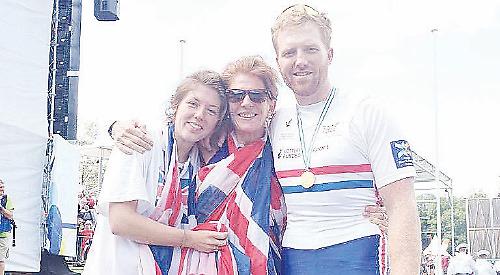 AN Olympic rowing champion has told how he couldn’t get a mortgage on a £190,000 flat and says he would be better off filling supermarket shelves.

Will Satch, who won gold in the GB men’s eight in Rio in the summer, was rejected by 40 lenders and had to rely on his mother to help him obtain a mortgage.

The 27-year-old Leander Club athlete was leaving his rented home in Henley to buy the two-bedroom flat in Watlington when he came up against unwilling lenders.

The former Shiplake College pupil receives a tax-free training grant of £28,000 (the equivalent of about £37,500 gross), from UK Sport, which is funded by the National Lottery and allows him to train full-time.

But lenders don’t classify this as income but as performance-based pay which won’t apply when the rower retires from the sport.

Satch said: “I’ve come back to Britain as an Olympic champion and I can’t even get a mortgage.

“I could go down to Tesco and stack shelves and probably get a better mortgage. It’s crazy.”

He had to ask his mother Sally, 56, who is a teacher at his former school, to be named on the mortgage papers before the loan was approved by Halifax.

Satch told the Sunday Times: “Even though I’ve managed to save up a £45,000 deposit and the property I’m buying is a steal at £190,000, the only way I’ve managed to get a mortgage is to put my mum on it — and not just as a guarantor but as a name on the property deeds.

“My mum already owns her own home, so that means it’s a second buy for her.

“Since April, there’s a new stamp duty levy of three per cent extra on second homes, so even though I’m a first-time buyer, I’m having to pay £7,000 stamp duty.

“That’s a lot of money to me because I don’t earn ridiculous amounts, unlike some sports stars.

“The other problem is that Halifax only agreed to lend to my mum while she’s under 70 so, because she’s on the mortgage, I’ve had to agree to pay it back over 14 years, which means my repayments are going to be quite big.”

Satch, who won bronze in the coxless pair at London 2012, also told how he saves money by shopping at a low-cost supermarket.

He said: “Aldi gives £25 a month in vouchers to more than 650 members of Team GB, so I try to use them a fair bit. I go to Waitrose because I’ve got a Waitrose card, so I get free coffee.”

He also recalled struggling to make ends meet in 2007 when he had just left school and started training full-time at Leander.

Satch said: “I had to pay rent and I wasn’t eligible for any funding because I was under 23. I’m not from a wealthy family, so I got a job as a rowing coach in the evening and a bartender at night.

“I’d train between 7am and 3pm, coach between 5pm and 7pm for £7 an hour, then head to the bar and work until 11pm or midnight for £5 an hour. I also did a bit of landscape gardening.

“All that meant I earned just about enough to cover my rent. I could get subsidised food at the club but phone bills and haircuts would be difficult and I had to pay for my car.

“I ended up getting into about £5,000 of debt on my credit card. That stressed me out. I’m a redhead, so I’m quite wired. I hate debt but I’d rather owe money to a bank than a mate.”

Satch said he had been paid “a bit of money” from making speeches following his success in Brazil.

“The biggest fee was about £2,000,” he said. “Rowers don’t get £500,000 sponsorship deals like track athletes. It’s a lot of work for not much recognition.” He said the tax system should do more to help low-paid workers.

“I’m surrounded by wealthy people in Henley and I know people at the top are getting stung as well, but they’ve got more money.