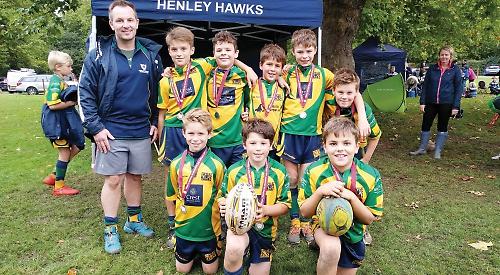 THE next generation of Henley Hawks took part in the annual Henley mini festival held at Dry Leas last Sunday.

The Hawks U11s were able to field all of their squad across three mixed ability teams. Games were played against local teams such as Reading, Abbey and Bracknell, as well as those from further afield such as Alton, Bancroft, Newbury, Tadley and Tring.

The quality of rugby from the Hawks was high and the results reflected this with a respectable record across the three teams of played 14, won 10, drew two and lost two.

With some free flowing rugby the Hawks scored an impressive 43 tries during the day and only conceded 19 showing that all the hard work that has been done on tackling and defence is beginning to pay dividends.

Henley U10s went into their first tournament of the year full of expectation following a successful end of last season tour to the Isle of Wight where they were undefeated.

With new rules to consider — rucking, mauling and scrummaging — this was always going to be a learning exercise for the entire squad who performed well.

The squad were split into three equal standard teams spread across three pools with different clubs to play.

The Henley N team reaped the benefits of their open, free flowing style of rugby to sweep away all before them winning all of their games. Their ability to keep possession and move the ball quickly paid dividends in some hard fought games, particularly against the bigger and more physical teams of Bancroft and Tring. Throughout the day Thomas Ferguson, Seb Phillis and Luca Coleman commanded the midfield with some aggressive defence which allowed turnover ball to be exploited out wide by the speed Felix Cooper, Will Tavinor and Lucas Edwards.

The Henley S team started strongly beating the likes of Tring and Marlow with Jack Renders and Felix Baker causing all sorts of problems with their strong running. Jack Bradbury tackled strongly in the centre with Charlie Reece rucking well and stealing a number of opposition balls.

Ethan Shuttleworth proved how elusive his running style has become and Finn Walsh showed a clean pair of heels to the Marlow team when he scored in the corner. Felix Richardson demonstrated his pace and determination when he cover tackled a Bancroft player into touch for what seemed a certain try. The S team finished with three wins, a draw and two losses.

The Henley E team played on the smallest pitch of the day which hampered the usual free-flowing style of play. They also had to deal with the two biggest and physical teams, Alton and Tadley.

Woody Hamilton-Hurst dealt strongly with the bigger players and was able to make breaks and hold players up. Their results finished up as won three, drawn one and lost two.