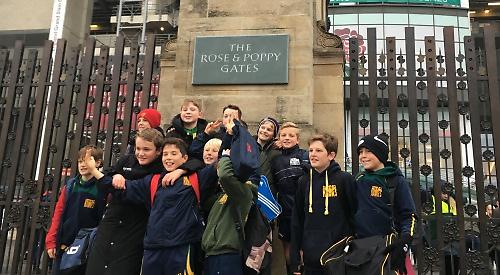 THE Henley Hawks under-12s team stepped out on the hallowed turf of Twickenham on Saturday.

They played a curtain-raiser before providing a guard of honour for the players in the England versus Australia international which the home side won 30-6.

The lads and their dads travelled from Dry Leas by bus and were greeted by England RFU development staff on arrival at the stadium. They had a rehearsal and lunch in the dressing rooms as well as chatting to the star players before defeating Watford RFC.

Matt Eckersall, a member of the party, said: “The best moment of the day was perhaps [England coach] Eddie Jones striding across the turf to watch our boys play two games against Watford RFC followed by interviews with Henley shown on the big screens.

“After all the excitement, a tired group of boys returned to Dry Leas at 8pm still absorbing the most unforgettable experience rugby could offer. A huge thank-you to all at Henley Hawks and England RFU for such a special occasion.”

Meanwhile, the Henley under-10s team enjoyed a day out at the Madejski Staidum with London Irish, which included a mini tournament and watching their Premiership 18-22 against Bath.