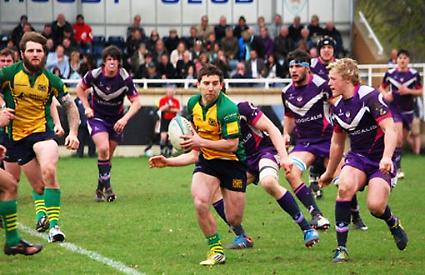 HENLEY HAWKS go into the last match of the season with their destiny in their own hands after defeating Loughborough Students 22-11 at Dry Leas on Saturday.

The home match against fellow strugglers Loughborough was billed as a game which may well decide which of the two sides could be in National 2 (South) next season.

As the game developed it produced entertaining rugby, particularly in the first half, and although the result was so important it was not a tense affair.

The Hawks found their defence tested at he start of the game with the nippy Loughborough backs thrusting into their territory but the hosts tackled hard and kept them at bay. The resultant pressure led to the award of a penalty against the Hawks in front of their posts for a scrum offence which the Students fly-half Sam Katz converted to give them a 3-0 lead after five minutes.

The Hawks were finding it difficult to gain possession but started to correct this through the hard driving play of their forwards. Skipper Matt Payne started to lead his forwards into producing what could be considered their best play of the season. Ably supported by the rest of the pack, but particularly locks Dave Clements - in this 100th game for the club - and Josh McNally plus his back row colleagues Ryan Newman and Robbie Stapley they combined well with the ball in hand and their off loading was some of the best they had produced this campaign.

This was well illustrated when they scored a try from a movement started just outside their own 22. Newman carried this forward with the support of McNally and Payne which stretched the visitors defence to breaking point and the flanker to finish the movement he had initiated with a try which gave the Hawk a 5-3 lead after 18 minutes.

The Hawks continued to keep the Students on the defensive with their enterprising play involving their backs as well and it was them that were the architects of their ultimate victory when they scored a try straight from their training manual. With some good ball from a set scrum, where the Hawks held sway for the majority of the game, fly-half James Comben was able to feed centre Danny Wells with a well timed flat pass which he collected at speed. This caught the Loughborough centres flat footed. Wells touched down near the posts despite the attendance of a closing cover. Comben made the score 12-3 with the conversion, a lead which the Hawks carried forward to the second half.

Following the break a rejuvenated Students side took the game to the Hawks and within two minutes scored from a pick and drive from a five metre line out through number eight George Messum. They continued to dominate the play which was now in the Hawks 22 and closed the hosts lead to one point when Chris Surman, who had taken over from the injured Sam Katz at fly-half, kicked a straight forward penalty.

The game did not flow as it had in the first half because of the incident of injuries including the need for Loughborough hooker Gareth Harris to be attended to for eight minutes before being removed by stretcher and the referee creating a stir by penalising crooked feed-ins at the scrums by both sides, an offence generally ignored by officials.

The Hawks began to get back into the game with some worthwhile possession which led the visitors committing offences as the pressure built and the issue in quick succession of two yellow cards to back row forwards Eoin Cremen and Messum.

The backs were now moving the ball from right to left and first of all Christoph Bart was caught stopped as he attempted to capitalise from an overlap. However, he did manage to squeeze in at the corner as a result of the Students scrum being put in retreat with a decisive surge which replacement scrum-half Luke Carter used to make the most with a blind side move. The resultant try was converted from the touch line by Comben who at the start of the Hawks renewed dominance had kicked a penalty to make the score 15-11 which was now enhanced to 22-11. The Hawks were now looking for a fourth bonus point try but the game came to a dilatory end. The Hawks chances of maintaining Division 1 status have been improved by this victory.