Children remember with poems and wreaths 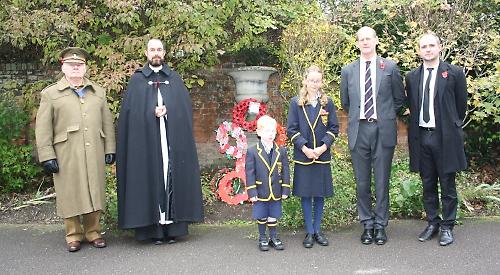 About 50 parents and staff also attended the act of remembrance which was held on the school’s all-weather pitch.

Headteacher Nick Armitage welcomed the crowd before a number of year six pupils spoke about why it is important to remember the fallen.

They recited the poems For the Fallen by Laurence Binyon and In Flanders Fields by John McCrae.

The children then stood in silence while the Last Post was sounded followed by a one minute silence.

Amateur historian Mike Willoughby, from Woodcote, was also welcomed to speak at the service and told the pupils he has "no doubt” they’ll carry on remembering in the future.

Rev Jeremy Tayler, the rector of Henley with Remenham, then led the school in prayer before a number of wreaths made by the pupils were placed in the school’s garden of remembrance.

Mr Armitage said: “At the end of the day, the importance of remembering the past and the sacrifices that have made been made for the children cannot be underestimated.

“The importance of remembering is about avoiding conflict in the future and encouraging the children to want to live peaceful lives in society – it’s important the children have an understanding of that.”

Mr Willoughby, who has carried out research on servicemen from the Henley area who died in both world wars, has been invited back to the school at a later date to talk more about the lives of soldiers.

He said: “I’m very pleased to have been invited because we can see the sincerity that emanates from the pupils and staff.

“The headmaster should be very proud of his pupils and staff and what it means to me and the parents.”